Technology review has one of the better reports about the army’s success in creating a remote controlled cyborg beetle in collaboration with the University of California – Berkeley.  From the article:

“The beetle’s payload consists of an off-the-shelf microprocessor, a radio receiver, and a battery attached to a custom-printed circuit board, along with six electrodes implanted into the animals’ optic lobes and flight muscles. Flight commands are wirelessly sent to the beetle via a radio-frequency transmitter that’s controlled by a nearby laptop. Oscillating electrical pulses delivered to the beetle’s optic lobes trigger takeoff, while a single short pulse ceases flight. Signals sent to the left or right basilar flight muscles make the animal turn right or left, respectively.”

This is far from the first success in remote controlled insects.  Flies and moths are other notable examples of other insects that have been “cyborged”.  Check out some awesome pictures of the beetle below and then be sure to follow the link to the technology review video to see the beetle in action: 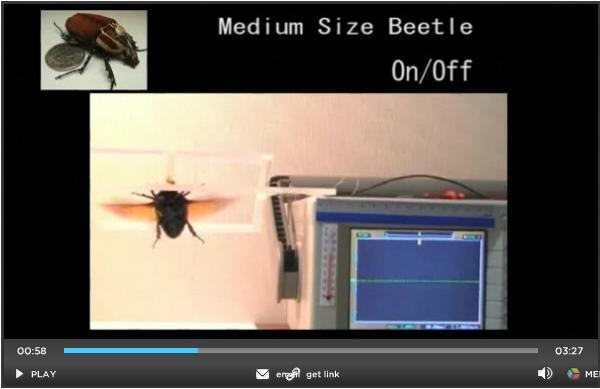