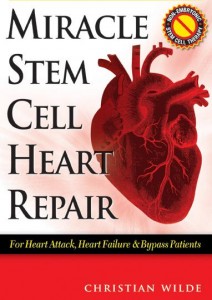 Today we learn that a team of University of Louisville doctors at Jewish Hospital will soon perform the first phase one FDA-approved clinical trial using adult cardiac stem cells to treat heart disease. Amazing…yes, but as is commonly the case these days, other parts of the world have already been performing this same procedure for many years.

We thus witness once again the interesting phenomenon where cutting edge medical therapies are increasingly being first pioneered outside of the United States, where researchers are unburdened by the strict regulations imposed in the United States by the moral conscience of its citizens and the FDA.  It will be interesting to watch this phenomenon continue to unfold in the coming years.

Patients that are already scheduled to undergo heart bypass surgery will have heart stem cells extracted from their hearts during the surgery.  These stem cells will be cultured in a lab and then 3-4 months after the surgery they will be “directly injected into cardiac scar tissue using a minimally-invasive cardiac catheterization procedure, which reaches the heart through a large artery in the patient’s leg.”

According to Ben Adkins’ article from Business First, “Animals tested for the procedure showed a five to 10 percent improvement in ejection fraction, or the amount of blood the heart is pumping, said Roberto Bolli, Jewish Hospital Heart and Lung Institute Distinguished Chair in Cardiology.”

“Our hope is that the cardiac stem cells will help the heart tissue regenerate, reducing the size of the patient’s scar tissue and improving heart function,” said study leader Roberto Bolli, .

Meanwhile, we need look no further than youtube to find a story of a patient who last year went to Thailand for this same therapy after reading a book from Christian Wilde titled the Miracle of Stem Cell Heart Repair: