Think you can spot an amputee?  Think again.  Meet the i-LIMB, the first commercially available prosthetic hand with five individually powered fingers.  Combining a revolutionary functionality with amazingly natural cosmetics, the i-LIMB is changing the lives of amputees across the globe – and blending right in.

Even while Dean Kamen and others we have previously reported on work on advanced robotic prostheses, the i-LIMB shows how keeping it simple can still provide amazing improvements to quality of life for amputees.   The i-LIMB uses electrodes placed on the skin of the remaining portion of the patient’s limb, usually on the top and bottom of the forearm.  When the patient moves the muscles that would normally have extended into their hand, the electrodes pick up on electrical signals generated by the muscle movement.   These signals become the basis for individual finger movement within the i-LIMB. 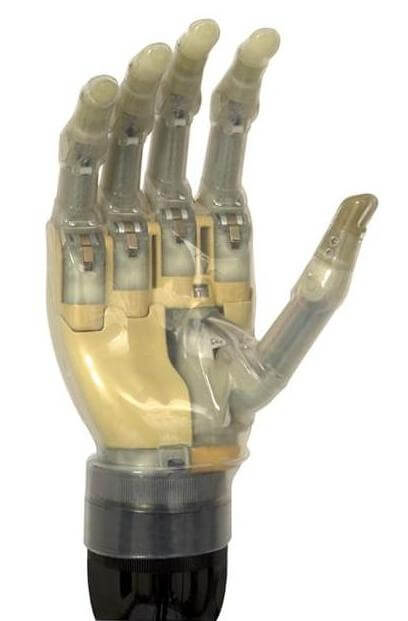 Introduced in 2007 by Scottish company Touch Bionics, the i-LIMB is capable of a variety of unique grip positions that allow the user to balance power and precision as needed.  By extending the index finger alone, patients can type on a keyboard or push buttons.  The user can also grip a key or dinner plate by rotating the thumb to meet the side of the index finger.  The prosthetic is capable of stopping when a sufficient grip is achieved, allowing the patient to grip sensitive objects (e.g. a styrofoam cup) without crushing them.  These more fine-tuned features give the i-LIMB a functionality that enhances the patient’s everyday life.

Patients can choose between a number of cosmetic gloves, including amazingly lifelike skins that blend in naturally with the rest of the body.  The i-LIMB also has a modular construction that allows each finger to be detached by removing one screw.  This way, a digit needing service can be quickly swapped out for a new one, rather than leaving the patient without their prosthetic while it’s being serviced.   The i-LIMB currently costs about $18,000, and is being used by over 600 patients.  More information can be found at the Touch Bionics website.

Check out the i-LIMB in action, as reported by Voice of America:

So what’s next for Touch Bionics?  “We are shortly to release our lower profile i-LIMB Hand which is more appropriate for female and smaller male users,” says Phil Newman, Director of Marketing.  The company is also developing a product for patients missing individual fingers.  “Our next big focus is ProDigits – replacement fingers.  This is a technology for a much larger patient population which has never had a powered finger option before.  We are very excited about this and have a significant number of trial fittings in play.”

Of course, the ideal prosthetic would be hardwired into the nervous system, capable of carrying motor information directly from the brain to the prosthetic and sensory information back up to the brain.  This is exactly the goal of research into Targeted Muscle Reinnervation (TMR) and Targeted Sensory Reinnervation (TSR).  But until these techniques are ready for widespread use, the i-LIMB shows that traditional muscle sensors can improve the quality of life for individuals today.

In the ongoing ethical debates surrounding body augmentation, prosthetics are usually spared accusations of being “unnatural.”  Like antibiotics or hip replacements (to name just a few), prosthetic limbs are widely accepted as beneficial technologies and medical miracles.  Amid the controversies over nanobots or genetic engineering, these less contentious advances should enter into the debate of what a “natural” human being really is.  Natural or not, replacements like the i-LIMB are improving the lives of amputees around the world, and only hint at the possibilities that the future will hold.

Now who can argue with that?