Nanobots the size of living cells swimming around our bodies, doing our bidding to fight disease, make repairs, and augment our abilities?  Futurists and sci-fi books have cooked up this fantasy for years, but will it really happen?  Sorry to burst your bubble sci-fi fans, but man-made, fantastic voyage-like motorized nanobots swimming through our bodies simply aren’t in our near term future.  Luckily there is another way, and believe it or not a company called Dendreon has already done it! 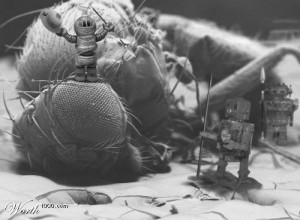 For diseases like metastasized prostate cancer where the disease has spread to perhaps millions of locations throughout the body, treatments are more or less nonexistent.  How are you supposed to fight a disease that is attacking you from so many places?  What is needed is a treatment that can systematically travel throughout the body, seek out the ‘enemy’, and destroy it one cell at a time.  Translation: we need nanobots!

So what’s the catch?  Although Dendreon used nanobots to fight prostate cancer, they didn’t make the nanobots themselves!  Instead, Dendreon used the masterfully equipped nanobots that already reside in our bodies.  That’s right, I am talking about our own immune system.  Enlisting the billions of cells of the body’s immune system as an army of specialized nanobots isn’t at all as fascinating as what we see in the movies, but it is every bit as effective and it is available now.

Just a few weeks ago we wrote a story on the breakthrough from Dendreon, but since then there have been some notable developments.

The magic behind Dendreon’s cancer therapy, called Provenge, is that it trains cells from the body’s immune system to identify the unique surface of individual prostate cancer cells anywhere in the body and destroy them.  The idea is not a new one, but Dendreon appears to be the first to have succeeded in making it a reality.

At the time of our last story, Dendreon had announced that its phase 3 trial of Provenge had shown significant success in prolonging the life expectancy of prostate cancer patients, but held off on giving any other details until a meeting scheduled for April 28.  Dendreon’s decision to hold off on this data until April 28 created a great deal of suspense and uncertainty, and many questioned whether or not the data was going to be as good as investors (and patients!) had hoped.  To add further drama to the story, a freakish 50% drop in the stock just hours before Dendreon released its results on April 28th is yet to be explained.

To the joy of both investors and patients, however, Dendreon’s unveiling of the data on April 28 seems to have met all expectations.  Results were so good, in fact, that Adam Feuerstein, one of Dendreon’s harshest critics was forced to make an informative public mea culpa that is worth a read.  The major findings published from the Dendreon trials were as follows:

Provenge is by no means a cure for metastasized prostate cancer, yet the results above pretty much shatter the effectiveness of any other known treatment and this is a big deal.  With no apparent red flags to speak of, Provenge looks destined for rapid approval by the FDA and will likely be available to patients in less than a year.  The financial side of the story is no small detail either – peak sales are predicted to be in the range of $2 billion.  Dendreon’s stock has responded in kind, tripling in value since the story first broke two weeks ago.

Although Dendreon’s treatment currently focuses on fighting prostate cancer, the company (and its competitors) will be working furiously in the coming years to harness this same technique to fight other diseases.

Man-made nanobots are a cool idea, and their time will come eventually.  But in the meantime why reinvent the wheel when the nanobots of our immune system are already sitting there, waiting to take our command?  Dendreon shows us that this is indeed a viable (and financially rewarding!) technique, opening the door to an exciting new paradigm in medical treatment.