The steps towards really cool technology are often less than amazing. Exoskeletons, mechanical devices you wear to enhance the body’s strength are some of the most sought-after and eagerly awaited gadgets you can name. The robotic knee recently debuted by Tsukuba University…not so much. While the knee has some impressive stats: it only weighs 5 kg (~11 lbs) including the battery and backpack, but can increase running efficiency by 30%. And in trials it allowed users to jog at 7.5 km/h (~4.7 mph). According to Nikkei News, developers even believe they can commercialize it in the next three years (no small feat). They say the device is meant for healthy people who want to move more efficiently. I’m left wondering, who wants to buy such a device? Most walkers/joggers are pursuing better health and should be doing all the muscle work themselves. Hopefully this robotic knee is just a step towards developing a better, more efficient, and lighter weight full body exoskeleton that anyone can use.

Tsukuba University already has a strong association with exoskeletons. Prof. Sankai and his lab are the creators of HAL, the full body mechanized suit. It’s unclear, however, if the Sankai Lab is responsible for this knee (it’s not on the website). Cyberdyne (the private company in charge of HAL production) has already demonstrated that the lower-half of the suit can be worn independently, so it would seem like a separate knee enhancer would be redundant.

Where could the robotic knee fit in? We already have powered knees for amputees, and full body exoskeletons would seem to make more sense than a system isolated to a single joint. Maybe the focus really is, as developers say, on healthy runners. A light weight, mobile device that enhances running isn’t much help if you’re trying to exercise, but what if you just want to get around town. Or maybe you’re on vacation in a high altitude or have to climb a hill. Perhaps soldiers in the field could go farther faster with a little help from such a device. There are cases where it could be useful. 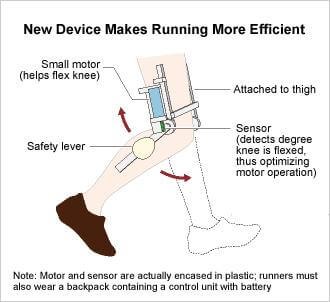 But I’m still skeptical as to its ultimate success. Bipedal mobility seems to already have a solution: automobiles. I don’t think we need more efficient ways to run unless they are paired with boosted strength, more precise movements, or much faster running speeds. The average human athlete can already run at 25 km/h for a good distance (hundreds of meters), but if a robotic knee could raise that to 50 km/h, or allow someone to maintain the speed for longer…possibilities start to open up. As is, I’m not impressed with Tsukuba University’s latest venture into human enhancement, but I am still hopeful that the next one will blow us all away.