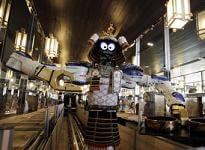 The Hajime restaurant in Bangkok became an international sensation this spring. It’s secret to success? Robot waiters. The machines, made by Motoman, are dressed as samurai and glide around on tracks as they serve customers shabu-shabu style dishes made by human cooks. They even perform fun dance numbers when things slow down. The restaurant, with the robot system, cost almost 30 million baht (~$932,000) to start, but its popularity may help it earn that back rather quickly. While we’ve seen several customer videos of the Hajime, the associated press just picked up the story with a top notch clip of the robots in action. Check it out below.