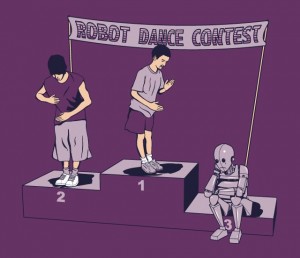 When you perform as many internet searches for “robot” as I do, you come across a lot of funny videos of people acting like machines. Just a hazard of the trade, I guess.  Here are some of the craziest, most impressive and hilarious dancers doing the “robot”. The videos are after the break. Enjoy.

You can’t mention robot dancing videos without bringing up Dave Elsewhere. His amazing performance at Kollaboration in 2001 earned him millions of fans the world over. He has performed many times since (he was even featured in a Marriott commercial) but it’s these early videos that really make me laugh.

So You Think You Can Dance is one of the most popular dance competitions in the world, so it’s not surprising it’s attracted its fair share of robot dancers. I’ve seen them all, but I still like Robert Muraine the best.

What is it that gives these dancers the determination and the confidence to practice these routines for hours and hours, days and days? Probably the roaring cheers and applause from fans. Takahiro was the reigning champion on Showtime at the Apollo for what seemed like forever. This performance from 2006 shows what kept him in the winner’s circle night after night.

But wait, you say, surely not all of these dancers perform solo. After all, robotics and mindless mass production go together like peanut butter and evil peanut butter (delicious). Don’t fret, gentle reader. We’ve got group performances too. Check out Uniqlo Mixplay’s understated style followed by dancing duo Robotdregene. Their techno antics won them the Denmark’s Got Talent competition in 2008.

There’s no better place to stop than at the beginning. For many people, the introduction to robot dancing was this performance of Dancing Machine by the Jackson 5 on the Merv Griffin Show. Skip ahead to see it start around 1:01. Classic.

Part of what defines the Singularity is that no one can really know what kind of changes rapidly accelerating technologies will bring. But one thing is for certain: the future will be filled with silly and talented dancers.