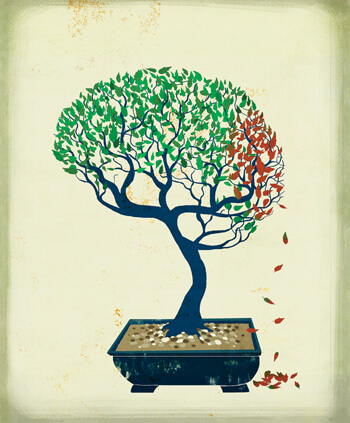 Twenty years ago, researchers made serious headway in the battle against Alzheimer’s disease (AD). They discovered a link between the brain damage in AD patients and plaque deposits in the brain – the so-called “amyloid hypothesis,” now the dominant explanation of the disease, was born. Today, two decades later, there are only four treatment options for AD patients. None of them attack or prevent the plaque deposits. None of them slow or stop the disease. Why not?

Not a single plaque-preventing drug has yet gained FDA approval. There are currently hundreds of drugs in development to combat the symptoms – and hopefully the causes – of AD. Many of these drugs are aimed at blocking the formation of beta amyloids, peptides that cause plaque deposits in the brains of AD patients. But are the plaques the cause of neuron loss? The amyloid hypothesis is still unproven, and not all research supports it. The FDA is holding the bar high: until a drug can not only show that it blocks plaque formation safely, but preserves cognitive capacity in AD subjects, none of these drugs will make it to market.

Testing whether or not a drug prevents cognitive degeneration can take years or decades – basically as long as takes for the disease to reach advanced stages. This presents pharmaceutical companies with a regulatory conundrum. Let’s say a company decides to test its drug on susceptible subjects before AD onset, catching the disease early and improving the likelihood of success. Clinical trials will take much longer – long enough for differences between subject groups to emerge.

The alternative approach is the one being taken by Bristol-Myers Squib, which is currently testing its new drug BMS-708163. BMS is testing the drug on early-stage patients, which means their trials will show results much faster than if they had tested subjects without any symptoms. But by waiting until the disease has already progressed into its early stages, they run the risk that their subjects’ degeneration has advanced beyond the period when the drug could have helped. Add in competition with other companies racing for the prize, and you get an idea of the stakes involved.

The link between amyloids and AD was first proposed when the gene that codes for amyloid precursor protein was found on chromosome 21. People with Down syndrome have an extra copy of chromosome 21 (i.e. an extra copy of the amyloid precursor gene), and they commonly develop AD early in life. People with the E4 variant of the gene ApoE also produce more amyloid plaques, and it increases their susceptibility to AD. (We recently covered a study of how people react to hearing that they carry this risk variant).

So why is the FDA holding these drugs to such high standards? It isn’t clear that amyloid plaques are actually the cause of neuron death. A few years ago, an amyloid vaccine was tested on patients with AD; seven of the eight immunized patients died with severe dementia, even after partial or complete plaque removal. Scientists have been tweaking the amyloid theory since, and new treatments do hold promise. But the FDA is wary of approving a drug that clears plaque without stopping or slowing the disease itself.

AD currently affects over 26 million people, and those numbers are rising as the world population ages. A few years ago, a study at Johns Hopkins described a “looming global epidemic” of Alzheimer’s: the number of cases will quadruple within forty years, ultimately affecting 1 in 85 people globally. Whatever its cause, the slow progression of AD makes clearing drug treatments a terribly slow process – and one all the more important for the wave to come.