How Do People Respond to Bad Genetic News? Just Fine.

If you were going to get Alzheimer’s disease, would you want to know? Or is genetic ignorance bliss? The new era of commercial genetics is putting all sorts of predispositions right at peoples’ fingertips, and not all of it is good news. As more people are genotyped in both research and commercial settings, a new ethical question emerges: are people ready to face their own DNA? One study at Boston University says – with a few important qualifiers – yes.

The BU School of Medicine ran a multi-year psychological review of peoples’ emotional reactions to learning their susceptibility to Alzheimer’s disease (AD). The Risk Evaluation and Education for Alzheimer’s Disease (REVEAL) study genotyped the adult children of AD patients for the gene ApoE, one variant of which increases an individual’s chances of developing the disease by 10 to 30 times. They then looked at how the disclosure of this information affected levels of anxiety, depression, and test-related distress. The group found no significant short-term psychological fallout of delivering bad news, at least compared to subects’ emotional baselines and a control group. Most people accept the news and move on.

The study was highlighted in a recent Wired feature on Google co-founder Sergey Brin which documents his discovery of a mutated LRRK2 gene within his own genome. Brin, whose wife Anne Wojcicki cofounded 23andMe, has a genetic polymorphism that puts him at a significant risk for Parkinson’s disease. Not everyone has the resources to mount a full-scale assault on their genetic predisposition – Brin has thrown $50 million at Parkinson’s research – but most of us would react as he has: by educating ourselves, weighing our options, and getting on with our lives.

Led by primary investigator Dr. Robert Green, the REVEAL study recruited 162 subjects whose parents have Alzheimer’s disease but who themselves are asymptomatic. All the subjects underwent genetic counseling during which they discussed their family history, learned about the gene in question, and took initial psychological surveys. Subjects were then randomly assigned to one of two groups: a disclosure group which received their genotypes, and a control nondisclosure group whose blood was not analyzed.

Within the disclosure group, 53 subjects tested positive for the ε4 variation of the gene, which is implicated in AD susceptibility. A major theory of Alzheimer’s disease is that it results from excessive amyloid plaque deposits in the brain. ApoE codes for a protein that helps to break down these deposits; the ε4 variant is thought to make the body less efficient at clearing the plaque, putting a carrier at greater risk. All subjects were tested for three psychological factors – anxiety, depression, and test-related distress – 6 weeks, 6 months, and 1 year following the tests. ε4 carriers reported higher test-related distress at the 6 week mark, but otherwise emotional states did not differ significantly from either the ε4-negative or the nondisclosure groups. Most subjects said that given the chance, they would undergo the test again.

Unfortunately, it’s hard to say whether these results could be generalized to the general population. For one thing, all the subjects were people willing or curious to know their own genotype; the study even found that those subjects who self-referred (i.e. sought the study out) had lower anxiety and depression levels in the first place. Researchers also specifically excluded participants whose baseline anxiety or depression were above a certain threshold. Arguably, these are the subjects most likely to undergo significant emotional distress at the bad news. Finally, the researchers acknowledge their results could have been different if their subjects weren’t well educated on the gene and disease (i.e. genetic counseling and family histories with AD). 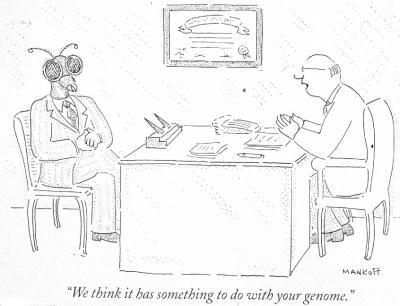 This final question of education gets to the heart of most concerns about genetic knowledge. Just how well educated is the public when it comes to their genes? Media outlets (but certainly never this one) constantly report genetic research in ways that are both sensationalist and overdeterministic. “Scientists discover the gene for alcoholism!” tends to make a better (and shorter) headline than “Scientists discover gene polymorphism is statistically more prevalent in alcoholics than in control groups!” The difference is important. Too often, people perceive genes as having clearly understood, direct causation with their phenotypes, which is frankly a flattering but misinformed picture of the current state of most genetic science. We haven’t reached GATTACA just yet.

That being said, assuming people can’t handle their own genetic susceptibilities seems (to quote 23andMe’s Esther Dyson on a related issue) “appallingly paternalistic.” Genetics is already becoming ubiquitous, both in medical and commercial sectors. We can’t (and shouldn’t) be protected from our genomes; we should be educated about them. Most of our genetic knowledge regarding disease is probabilistic anyway, so learning about predispositions can help people make smarter preventative dietary or medical decisions (e.g. as with news of high cholesterol). And that’s what I call personalized medicine.