Open wide! Earlier this month, Swiss pharma giant Novartis announced it will be seeking regulatory approval of “smart pills” embedded with microchips within the next 18 months. The chip-on-a-pill, developed by Proteus Biomedical (and snatched up by Novartis for $24 million), will transmit data from the body to doctors, helping them to track med intake and tweak dosage. We previously covered the Proteus system’s clinical trials; now it looks like it will see European regulators by 2012.

So how does it work? The microchip is embedded in a normal pill – Novartis is starting with meds for organ transplantation, but the chip could be attached to any existing medication. As stomach acid breaks down the pill, it activates the microchip, which transmits time-stamped data to a patch worn on the patient’s skin. The patch then relays the data to your local wireless signal or smartphone, where it’s sent to your doctor (via a series of tubes). This lets your doctor ensure you’re taking the proper dosage at the proper time – or that you’ve taken your meds at all.

The system could also pass along important biometrics, like temperature and heart rate. Novartis has exclusive rights to the technology, which it plans to package first with existing medication that mitigates dangers of organ transplant. Following a transplant, patients require immunosuppressive drugs to reduce the risk of organ rejection; but this kind of therapy can increase the chances of infection. These dual dangers make dosage an important metric for doctors to monitor, and a good application of the microchip technology.

Novartis hopes to side-step a lengthy full regulatory review because its chip is attached to medications that are already on the market. If the chip is safe and doesn’t affect the normal drug action, it would be considered bioequivalent and skip some red tape. But regulators will be interested in more than bio-safety; the wireless transmission of information brings up questions of data security. Can a 3rd party intercept the signal? Figure out who takes what drugs, when, and in what doses? Regulators will be looking to ensure that individual data is transmitted securely, and for good reasons.

Data security aside, the idea of microchipped meds seems like uncharted ethical waters. I haven’t seen much discussion of the first application that jumped to mind: psychiatric medication. There are a wide range of reasons why people skip doses – forgetfulness, unwanted side effects, or plain old rejection of doctor’s orders. The context is also crucial here: are we talking about skipping a dose of Prozac at home? Or palming Clozaril at the hospital? Refused or skipped meds are notorious problems within the psychiatric community, and chipped drugs would add a new level of control over patients’ lives. Foucault would have a field day.

Skipped meds aren’t the only issue. What would be the consequences for drug abuse? It doesn’t seem too far-fetched for chips to be able to report who took which drugs, and where. This would have some major consequences for the rampant black market for painkillers in the US; could law inforcement get their hands on drug use data? Opiates wouldn’t be the only issue; imagine doctors (or police) tracking the actual use of Adderall across a modern university campus. During finals week. 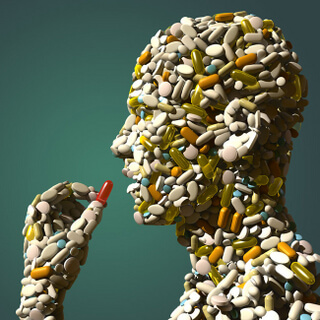 Set aside the paranoia, and the potentials for personalized medicine are tremendous. We’ve talked about the promises of body 2.0 previously. As the chip technology is improved, it could be used to watch individual drug uptake and action; treatments could be fully customizable in real-time. That could mean patients wouldn’t need to wait weeks to determine if a drug was compatible, or have to switch medication several times. If you were in the 2% who will experience a particular side effect, your doctor could know before it kicked in. The promise for customizable treatments is a powerful one, and it’s already a driving force in biotech.

In my mind, this technology straddles the line between body 2.0 exciting and dystopia/panopticon creepy. I like lying to my dentist about how much I floss. Of course there are far less benign examples, but the question of privacy is tightly wrapped up in this kind of biotech. As per the cliché, new advents in technology make new things possible – some we want, and some we don’t. Microchipped medication will be here soon. We should start discussing what to do once it arrives.