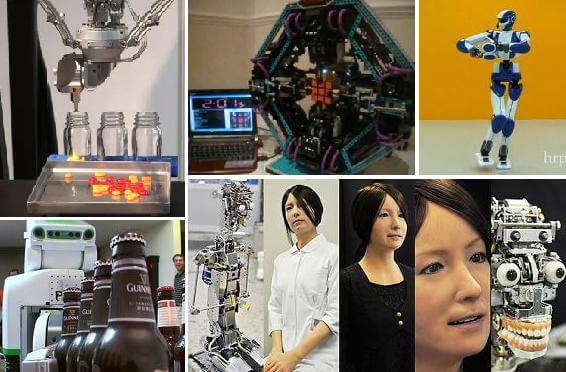 Welcome to the third annual Singularity Hub robotic year-in-review. We’ll be showing you the best robots – and the most incredible videos – from 2010. This year we’ve seen robots guarding nuclear stockpiles, flying through hoops, fetching beers from the fridge, parallel parking, wrestling, solving Rubik’s Cubes, and more. Whether you’re a nurse, a machinist, a racecar driver, or a soldier, you might soon find yourself replaced (or at least outdone) by your robotic counterpart. These robots are incredible, creepy, funny, and frightening – sometimes all at once – and they have us hungry to see what next year holds in store.  In addition to this review, you might also want to check out our best robots of 2008 and best robots of 2009 stories from the past.  Without further ado: Singularity Hub presents the best robots of 2010.

First up is Kawada and AIST’s HRP-4, a bipedal robot that boasts some really impressive flexibility and balance. The HRP-4 (the newest in a line of HRP bots) looks incredibly natural in its movements, and it’s currently for sale at a mere $300,000. Check out these clips of it walking, stretching, and showing off some moves:

Not only are robots getting more flexible and natural in their movements – they’re getting faster. You might remember Boston Robotics Petman robot running a treadmill from last year (it was one of our favorite 2009 bots). Well this year, the Petman is back with a boost in speed, now clocking in around 4.4 mph – beating out the Toyota humanoid’s 7.0 kph and earning it a spot on our best-of-2010 list.

Telepresence in the Uncanny Valley

2010 has been a big year for humanoid robotics, particularly in Japan. While we haven’t reached Blade Runner just yet, these replicants can mimic a whole range of human expressions. Probably the most impressive telepresence robot we’ve seen this year, or at least the most versatile, is the Actroid F by Kokoro, a female humanoid that blinks, nods, smiles, shifts its eyes, turns its head, and even breathes. Check her out in action:

Needless to say, telepresence has found its way into the uncanny valley. If the Actroid F creeps you out, remember: it’s actually good enough to creep you out. This robot is a modified version of the Geminoid F, which you can see here (along with her Terminator-esque facial interior):

Both the Actoid and the Geminoid are the work of Dr. Horishi Ishiguro of Osaka University – basically the leading figure in life-like creepy androids. Besides his life-like telepresence robots, this year we also got our first glimpse Ishiguro’s Telenoid robot, a ghost-white minimalist telepresence bot that replicates your voice and head movements. Also very creepy, in a cute sort of way:

While we’re at it, we should probably mention the collaboration between UCSD and Kokoro: Baby Diego-San, a full-bodied baby robot with 60 moving parts, 88 actuators, cameras for eyes, speakers, and a whole host of impressive tech. It also looks like something out of an 80’s horror flick… though, to their credit, the baby-bot is obviously still in progress. But man, that thing is ugly.

Bots on the Move

One of our favorite (and most popular) robot videos from this year was Stanford’s robot car Junior screeching a 180 degree spin into a parallel parking spot. Junior’s automated system uses a combination of physical principles and imitation to produce incredibly precise results, placing the car within two feet of its target. In this case, that means an Ace-Ventura-style parallel park job that’s badass to behold:

Stanford is also aiming for its robots to take over the racing world. Teaming up with VW Electronics Research Lab, Stanford scientists made a robot Audi that recently raced all 12 treacherous miles of Pike’s Peak, one of the most challenging races in the US. Human drivers are still well ahead of the robot racer (it took 27 minutes to complete the course, compared with the current human record of roughly 10 minutes), but the automated completion of such a complicated course is an accomplishment in itself.

Of course robots aren’t just sticking to the ground – they’re starting to rule the skies. Grad student Daniel Mellinger at Penn’s GRASP lab has been teaching his autonomous flying drones some new tricks: recovering from being batted around, flying through multiple hoops, and even diving through moving hoops that are tossed in the air.

The quadrotors can also pick up objects (alone or in concert) using attached claws.  Not to mention spy on people with a pivoting camera.

While we don’t yet have armies that consist entirely of weaponized quadrotors, robots are still making serious headway into the armed services. Raytheon unveiled its new robotic XOS 2 Exoskeleton, designed to help army personnel move heavy materials. It employs hydraulic to boost the lifting capacity of your average soldier; unfortunately, it still needs to be plugged in. It’s not Iron Man, but it’s pretty cool nonetheless:

Meanwhile, the US National Nuclear Security Administration – you know, the folks who guard all those nukes we keep in the desert – have been employing robots to guard the US stockpile. Autonomous robot vehicles now patrol the nuclear arsenal (and waste) at the Nevada National Security Site – a move aimed to save money and boost the quality of security. Insert throwaway Skynet joke here.

Willow Garage robots have been arguably improving the quality of human life the most over the past year. First up, we have their PR2 bot taking beer orders from over the web, fetching the beers from the fridge, and delivering them to thirsty workers. Quite possibly the best robot accomplishment of the year.

And with all that partying, who has time to do laundry? Berkeley researchers taught the Willow Garage PR2 to pick up towels, find their corners, and neatly fold and stack them. Now they just need to make it look like Rosie from the Jetson’s.

Jobs are hard to come by these days… unless you’re a robot. This year we’ve seen a plethora of industry bots, and they’re expanding into some unexpected fields. First we have Daishin’s Seki 5-axis mill carving a motorcycle helmet out of pure aluminum, just to celebrate the company’s 50th anniversary.

Next up is the Adept Quattro, the world’s fastest robot (employed for placement and sorting), competing against humans operating a Wii remote. Visitors tried to prevent the robot from completing its sorting tasks by Wii-ing its platform away from it – to no avail.

Speaking of speed… in case you need your M&M’s sorted by color, really quickly, FANUC’s M-1iA has you covered. This picking and sorting bot can see in color, and do its ultra-fast job accordingly. Pharmacists (or, uh, candy-sorters) – beware, your job may be at risk.

If you’ve been to the hospital recently, you may have noticed some strange nurses roaming the halls: the TUG robot treks around the hallways delivering meals, blood, medical supplies, and more. Their “laser whiskers” help them avoid humans and obstacles, though it would appear they occasionally cut somebody off.

Finally, the KIVA robotic warehouse has been making more waves this year, and has helped a few companies rewrite the rules of product delivery. Diapers.com and Soap.com, two companies owned by Quidsi, Inc (recently acquired by Amazon), have been using KIVA systems to streamline their delivery operations. Thanks to the robotic warehouse, Soap.com has been offering free 1-2 day shipping with all orders over $25.

Finally, some of our favorite robots don’t fit into any given category. First up, the best Rubik’s-Cube-solving robot made out of Legos you’ve ever seen (unless you have some weird hobbies). Cubestormer always clocks in at less than 12 seconds, and sometimes gets under 5. Pretty amazing.

Researchers at Carnegie Mellon recently developed a biomimetic robotic snake – nicknamed “Uncle Sam” – that can climb trees and look around with its camera eye. It’s an amazing example of how engineers can take tips from Mother Nature, especially when designing robots to interact in the natural world (of a tree).

If you got a JO-Zero for Christmas, you’re luckier than I am (and you shouldn’t be reading this, you should be having the time of your life). For the rest of us, we can watch and dream: the JO-Zero is the best toy robot that $1,300 can buy. It’s got twenty degrees of freedom and can be programmed to all your small robotic needs.

Sure, you can make your JO-Zero dance… but why not make it wrestle? Last January, the offices of RT-Corp, Ltd in Japan hosted U1K, a wrestling match for lightweight robots (those under 1 kg). The winner was Igaa’s robot built especially to rumble (and winner of previous U1K competitions): Soga. Watch him kick some robot butt in this funny, impressive clip:

That wraps up our favorite robots from 2010. We loved this year especially for its broad range of impressive robots – everything from military and industrial robots to puzzle-solvers and parallel-parkers. As always, we probably missed a couple of your own favorites; feel free to tell us about them in the comments. And of course stay tuned to Singularity Hub for the latest in all your robotic news (like adding us to your RSS feed).