I can fit more than a million robots in my pocket. So can you. LoveBots, a fun new iPhone app from Kit-Robot, allows you to mix and match hundreds of robot parts into fun new creations. The touchscreen art app was developed by Remo Camerota, artist and author of Drainspotting and Graffiti Japan, and Kiyoshi Kohatsu former creative lead of animation at Disney. LoveBots is a drawing app for people who can’t draw but still love making robots. Choose from a selection of robot heads, arms, eyes, etc and combine them into over a million different possible bots. You can share your newly assembled drawings with friends via Facebook, Twitter, or email. Easy to start and pretty addictive once you start going, LoveBots is a time-waster to be certain. Watch my brief video tutorial below to get an idea of how to master the app. A ‘lite’ version is available for you to download for free, with the full scale iPhone/iPad app retailing at $3. LoveBots was #1 on the Japanese Staff Favorites list on iTunes. I had a chance to talk with Remo Camerota in his mountain stronghold in Tokyo, and get the scoop on what’s in store for LoveBots and Kit-Robot in the future. This fun robot factory is just the beginning.

Making robots with the LoveBots app is pretty simple, and anyone who’s used a touchscreen before shouldn’t have too much trouble. Pick parts by tapping their icons and selecting from various pop up menus. You can move things around just by dragging, with pinching moves used to resize, and sliding moves to rotate. Avoid pressing the big red destruction button and you should be fine!

The drawings used in LoveBots were all originally made by hand by Camerota and Kohatsu. They have a great 1950s sci-fi feel to them, with some strong overtones of manga and anime. For those unfamiliar with Camerota and Kohatsu’s work, these guys are pretty experienced when it comes to pop art. Camerota’s Whitewall Studios is an edgy animation house with some cool books and productions to their name. Check out the anti-Apple viral video they made for DoubleTwist below. Kohatsu has worked on projects like Ren & Stimpy, Beauty and the Beast and many others over the years. Pretty cool to see them turn their skills over to robots and mobile apps.

According to Camerota, LoveBots was sort of a pet project that refused to stop growing. He’s always loved the tin toys and robot drawings that have filled public consciousness over the last century or so. Over five months, he and Kohatsu created 25 original robots in that artistic style but each with its unique appearance. They then euthanized those bots and split them into pieces. From that simple beginning comes the scores of parts and more than a million combinations available on LoveBots.

Camerota says that there will be even more in the near future. He plans on adding a new original bot to the lineup (thus dozens of new parts) every few months. So you can expect your robot repertoire to increase with every update. He’s also hoping to make LoveBots versions of celebrities, so you can give your bot a touch of Arnold Schwarzenegger. In the near future, Camerota will expand into Android, and make improvements to the control scheme (an ‘undo’ button would be nice, and that destruction button is damnably easy to tap accidentally). There are plans to explore animation as well (you wouldn’t expect less from Kohatsu), and there could be LoveBots webisodes appearing in the future.

The team even wants to expand into vinyl figures so that you can take your LoveBots fun into the real world. Speaking in very general terms, Camerota hopes that Kit-Robot will be able to send you a box of (random?) toy robot parts that you can then assemble into unique figurines of your own. Pretty cool. Additionally, Kit-Robot will probably expand beyond robots. LoveCritters, or LoveMonsters, or LoveCreatures, etc might be coming to smart phones in the years ahead. Sounds cool, but as Camerota tells me, time is a really precious commodity. It’s going to take a while before Kit-Robot can explore these various realms. 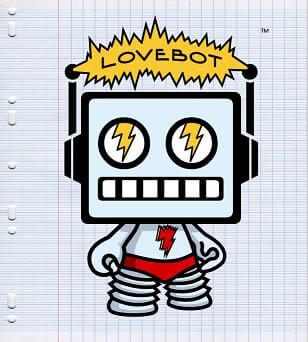 If you’re looking for a use for this App, well, it’s mostly meant for fun. Still, the social networking aspect does mean you can share that fun with just about anyone. Camerota also says that the images in LoveBots are under a creative commons license, so you should feel free to use your creations however you like – on posters for your electronic band, as a signature on your emails, or just as wallpaper on your phone. Camerota says that Kit-Robot is even open to people using their bots in for-profit ventures, just contact them to negotiate the terms. 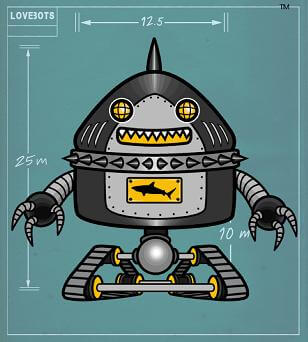 As time-wasters go, LoveBots is definitely one of the more enjoyable I’ve played with recently. I think it will be interesting to see if ‘art aides’ like this one start changing how we personalize our web presences, or even affect how we view ‘real art’. Some day we’ll probably be able to take creations like the ones made on LoveBots and email to a 3D printing studio (or use the one we have in our homes) to bring our creations into the real world. For now, I just like LoveBots for what it is: a fun way to pass the time by making cool robots. Nothing wrong with that. 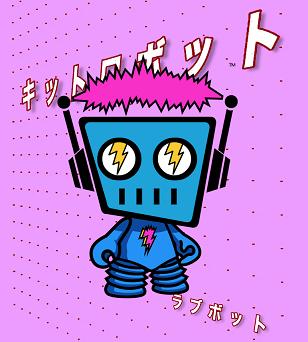 Disclosure: Upon his request, the author was sent a free version of this app prior to review.