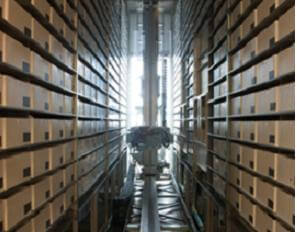 A new pharmacy supplying medicine to the UCSF Medical Center is currently under the control of a handful of Swiss and Canadian robots that won’t let the pharmacists handle the medications directly. Housed within a highly secure and sterile environment, the robots unashamedly dispense oral and injectible medications free from meddling humans and their contaminants. To date, they have prepared and processed more than 350,000 dosages without error rendering the pharmacy staff’s counting skills useless. As the following SmartPlanet video shows, these robots are full of pill-counting machismo:

Snarkiness aside, the UCSF Automated Pharmacy is chock full of awesomeness, providing numerous benefits to pharmacists, doctors, nurses, and, of course, patients. It is truly a state-of-the-art facility churning out 10,000 doses a day that has raised the bar for incorporating robotic systems into an environment that has been long overdue for automation. What has prevented full automation in the past is the high stakes of patient meds. A pharmacist’s job is clearly much more intellectually tasking than just bean counting, but medication management, including sorting and counting, has been one of the unmistakable signs of the pharmacy trade. While it makes for a nice picture to teach five-year-olds about people in their community, the unfortunate reality is that it is also a source of human error. Medication errors across the board are believed to cause over 7,000 deaths, injure millions, and cost $3.5 billion annually. Somewhere hidden in those numbers is the pharmacy factor, including inadvertent mixups, wrong dosages, contamination, and other unfortunate events caused by the error-prone human. As more and more hospitals are realizing, automating pharmacies is consistent with the goals of saving lives and money.

The new facility, located south of San Francisco, has been partially in operation since last October and was built to support the UCSF Medical Center and two area hospitals along with a new women’s, children’s and cancer specialty hospital that is planned to open in 2014. Though renovation of the old pharmacy was considered, it would actually cost $24 million to upgrade the old pharmacy, a whopping $9 million more than the new facility, and that doesn’t even include the cost of automation. The planners at UCSF wisely saw this as an opportunity to design the facility around the automation, which starts with finding the right robots for the job. They needed a system that would receive prescriptions for both oral and injectible meds, fill them, and deliver them to patients while minimizing the potential for mixups.

Now, over the last few years, multiple hospital pharmacies have been incorporating robots, so it is no surprise that the candidates for the facility were Swisslog’s $1.5 million PillPick and BoxPicker Systems and three Canadian RIVA robots from Intelligent Hospital Systems, each one costing about $1 million. These are veteran systems in the automata world. The PillPick robot that handles packaging and dispensing of doses is already installed at over 40 sites in the US, and the BoxPicker bot, which takes care of inventory control, has been used at hospitals like the Loyola University Medical Center since 2006. The RIVA robots, which stands for Robotic IV Automation, are increasingly finding their way into hospital pharmacies that have need of automated systems for intravenous dosages, especially cancer drugs that can be toxic or radioactive. Together, these robots remove pharmacists out of the mechanical aspects of the pharmacy, allowing them to use their brainpower on the patient side of their jobs.

While the installation of the robots will go a long way toward making the system more efficient and presumably lowering patient risk, the UCSF pharmacy planners wanted to really make the most out of the automated system. That means thinking about utilizing the ability of the robots to use barcodes. When a pharmacist enters the prescription into the computer, medications are selected and packaged into patient-specific bundles that are on a ring with all the meds tagged with barcodes. The bundle is then delivered to the hospital where it gets to the nurses attending the patient. The barcodes allow for nurses to track patient medications at the bedside. The medication on the ring are in sequence so that the nurse can follow the medication order to know when and how much of each to administer. The system is dependable, predictable and marginalizes human error.

As you can tell from the figure showing the automated process, the system will become even more streamlined once the pharmacy’s system is brought online in the hospitals they service. This will allow the treating doctor to enter the prescription into the system directly, eliminating much of the paper pushing and record keeping that clogs up offices and pharmacies.

The UCSF Medical Center’s vision for a 21st century pharmacy, like the Forth Valley Royal Hospital in Scotland, is bold but they have accomplished something monumental in bringing together various robots to streamline the process from prescription to patient. The fact that no known dosing errors have occurred is a testament to how automated systems can handle mechanical tasks much more accurately and efficiently than humans. But the real transformation that is occurring is shifting pharmacists, doctors, nurses, and other supporting healthcare professionals away from the mechanical aspects of their jobs and enabling them to focus more on the more intellectually demanding, socially engaging and emotionally rewarding parts of their jobs: providing patient care. Let’s hope that the cutting-edge facility becomes mainstream in the not-too-distant future.