Cisco is a giant in tech and telecomm – a giant with prophetic visions. Every June it releases its Visual Networking Index (VNI), a review and forecast of how IP networks are growing worldwide. This year’s VNI gives a remarkable prediction for 2015 – that the traffic on the internet will total 966 exabytes – four times the current level! That’s the equivalent of more than 240 billion DVDs worth of data. Along with this exponential growth in traffic, Cisco makes more other important predictions: 2015 will see 3 billion internet users, 15 billion networked devices, amazing growth in Asia, Latin America, and Africa, and the prevalence of video as the largest source of traffic. Learn more about Cisco’s vision of 2015 in the video and charts below. While profound all on their own, these accelerating trends in online activity are just signs of the deeper changes that will accompany it. The digital age is spreading to all corners of the globe and with its arrival will come shifts in power, culture, and personal identity. Hopefully for the betterment of all humanity. 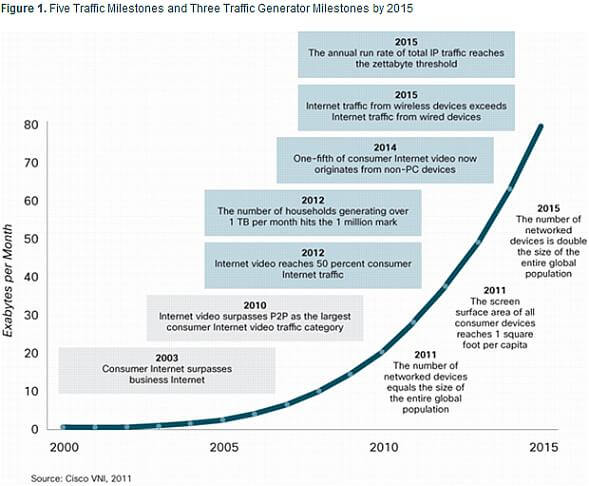 Quadrupling traffic by 2015 is incredible, but it’s largely the result of four trends any of us could predict. First, the number of internet users is increasing steadily as networks spread through the globe and connecting devices get cheaper. Second, more and more devices are coming online – mobile phones for sure, but also appliances, meters, etc. Third, the speed of internet connectivity is increasing: Cisco believes the average speed will go from 7 Mbps now to nearly 28 Mbps in 2015. Fourth and last, content on the internet is getting denser with data, in large part because so much involves video. By 2015, video will clearly be ahead of file sharing as the largest portion of internet traffic (up to 61%). We’re talking one million minutes of video sent every second! That’s insane. With users, devices, speed, and data density all increasing, it makes complete sense that we’d see exponential growth in online traffic.

There are some amazing details from the VNI discussed in the following video, but fair warning, the people speaking aren’t the most entertaining to watch. Feel free to skip around. A lot.

Cisco’s projections are based on data collected by the company, reports from allied and associated internet service providers, and public demographic information. You can learn more about Cisco’s methodology for the VNI on their website here.

Some of what I find so interesting about Cisco’s VNI data is the breakdown across regions. Frankly, the US isn’t going to be on top anymore. While internet traffic will quadruple worldwide, it’s only going to triple in North America. Compare that to Latin America where Cisco forecasts a 7 times increase, or Africa, where the tech giant is predicting an 8 fold upswing. Asia, in total, is expected to surpass the US in total traffic. Again, none of this is terribly surprising when you consider these regions have much lower adoption levels than the US.

Still, the changes that could come from this shift in prominence are very important. Most of the people who are coming online between now and 2015 aren’t going to be speaking English. While we’ve discussed the possibility that there will be a shift towards another dominant tongue (specifically, Chinese), I think it much more likely that we’ll see a plurality of languages. And a plurality of cultures. Facebook, Google, and all the other titans of the web will need to adjust themselves to new social mores and legal paradigms or risk losing a big chunk of these emerging markets to upstart companies that will. Translation programs, which are sure to improve in the next few years, are going to also allow everyone, regardless of geographic or language separation, great opportunities to exchange ideas.

Somewhere along the way I can only hope that the humanity-improving resources we’ve seen growing online will find wider audiences as well. Think of a world where three billion people have access to the Khan Academy and its great (mathematics) education. That’s also three billion problem solvers who can be asked to help with crowd sourcing projects. Many helpful solutions to the world’s ills (like those dreamed up by Singularity University graduates) could leverage greater internet connectivity to perform meaningful change with billions of people around the world.

We can’t ignore the fact, however, that most of what we’ll be sharing on the web will be video – we’re basically moving the TV experience to the computer. While the advent of television altered the 20th century, I’m not sure we can count on internet TV to do as much in the 21st. If all we’re doing is sharing videos more and watching broadcast TV less, the quadrupling of traffic may not mean very much. Sure, video education, video conferencing, and video security could all make big impacts, but on a fundamental level switching the location (but not the medium) for entertainment probably won’t…at least not in just four years.

Perhaps then, the most profound implication of Cisco’s NVI report is that humanity will be technologically capable of quadrupling internet traffic in just a few years. We’ll be able to create the devices, the networks, and the content, AND be able to get it to consumers at costs they can afford. That’s far from a trivial engineering feat and it speaks to the advancements in computing that we’ve been seeing for years now, and will likely continue to see moving forward.

I can’t look at Cisco’s exponential growth curves without thinking of Ray Kurzweil and his predictions for the near and not-so-near future of information technology. No industry exists in a vacuum. By projecting accelerated internet adoption, Cisco is implying associated growth in many other fields. How many industries are required to fuel telecommunications growth and how many are in turn impacted by it? It’s quite possible that Cisco VNI isn’t a vision for the future of internet traffic, but a vision of technology as a whole. If something as central as online activity is going to grow exponentially, then maybe the entirety of science and technology will come along for the ride.

*The bar graphs shown above were produced using Cisco’s VNI Forecase Widget. You can make your own by visiting their site!