The 25th KondoCup, A Milestone in Robot Soccer (video) 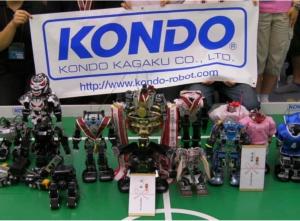 They said it would never last. Actually, they didn’t. They said, “let’s keep doing this because it’s awesome.” KondoCup just celebrated its 25th event last week. The soccer competition featuring small humanoid robots attracted crowds in Tokyo on June 18th, as teams of (amateur) engineers battled through their athletic surrogates. Check out the championship match in the video below. Every year sees the arrival of more robotic competitions, and their prolific nature gives enthusiasts all over the world ample opportunities to improve their robo-soccers skills. KondoCup has reached thousands of spectators and hundreds of bots in its first 25 iterations, and we can expect the next 25 to provide an even bigger impact.

KondoCup is sponsored by Kondo itself, makers of the KHR line of humanoid robots. About two feet tall, and retailing around $1000 or more, these bots belong to the top tier of devices routinely adopted by enthusiasts around the world. Their capabilities, while not quite up to human standards, are still pretty impressive as you’ll see in the following video. TAKE (mostly blue, starting on the left) battles team RFC Autumn Leaf (mostly pink, starting on the right). For those who don’t want to watch all eleven minutes of the match, I’ll spoil the results below the video*.

Though we’re celebrating the 25th KondoCup, we’re not celebrating the 25th anniversary of KondoCup. That’s because the event actually happens several times each year. I’m not sure which would be more impressive: if KondoCup had actually started in 1986, or the real fact that Kondo has managed to attract spectators and competitors to 25 events in the seven years since KondoCup began (e.g. 2004). Certainly the soccer tournament has become a steady source of entertainment and challenge to those who love amateur robotics. (It’s also not a bad way to promote the sales of KHR bots.)

KondoCup is far from alone. As we’ve mentioned before, there are several other big names when it comes to bots taking the field. There’s Robo-One, Robo-Cup, Robotic Games, and Robo-Games to name a few. Each of these competitions happens at least once a year, and several hope from venue to venue around the globe. That means that no matter where you are, no matter when you build your humanoid robot, there’s a good chance you’ll be able to test it in a robotic soccer match fairly soon. Many, like KondoCup, are now regularly streamed live on the web, meaning that even if you can’t attend the competitions in person, you can watch and learn in real time.

It’s unclear how such availability has affected the amateur robotics community, because these games have been a staple of the scene for the past decade. I suspect we owe much of the vitality of the enthusiast market to these steady opportunities to meet other amateurs and compete. We should praise makers like Kondo, Aldebaran, and Robotis for improving their bots considerably over the past decade and (in some cases) making them more affordable. Yet we should have equal praise for the competitions that make purchasing those robots an attractive investment. As the technology continues to improve, and the tournaments surrounding it become more popular, we’re likely to see amateur robotics thrive in the years ahead. That means more amateur engineers experimenting and improving their designs, and more students raised with interests in the field. Someday, if it’s not true already, we’re going to see major developments from scientists whose first exposure to robots came from events like the KondoCup.

Congratulations on the milestone, and I can’t wait to what the next 25 KondoCups may bring.