It’s time to pack my bags and move to a new social network. Who’s with me? Google+ has been available for less than a month but it has gathered incredible momentum. Estimates put early adopters at more than 20 million, the Google+ mobile app held the top seller on the Apple app market, and the fledgling media site is awash with activity: Google co-founder Larry Page reported that there have been more than a billion items shared and received every day! (The +1 button, which is integrated into Google+, gets about 2.3 billion uses a day.) The Google+ train is picking up steam and I’ve already climbed aboard. While things are still new I thought I’d share with you why I’m leaving Facebook (and Twitter, and LinkedIn, and Buzz), and what I’m learning as I move to Google+. Forgive me for getting a little more bloggy than usual, but there’s so much I’ve discovered and enjoyed, I just had to share.

Free To Be Me

The reason I’m switching to Google+ can be summed up succinctly: Facebook is about Friends, Google+ is about Circles, and I’m a control freak. With Facebook, it has never been easy for me to manage information. Friend Lists help, and there is a (relatively) comprehensive set of privacy controls that let you dictate who sees what, but those tools never seem like enough. I’ve customized the crap out of Facebook’s privacy controls because I’m paranoid about who sees what on my Facebook account, but I still want to share with people. It’s time consuming and frustrating. Every time I send out a status update, or upload a photo, or comment on a thread, I have to ask myself, “who’s going to see this?” Because, honestly, it matters. Businesses trawl through your social media accounts before they hire you, parents explore your habits, enemies and ex-lovers snicker at your poor grammar, and lawyers are starting to use Facebook to help them pick jurors. When faced with such interests into your social network it seems like there are only two options: you can become really paranoid about what you share (like me), or you can decide that privacy is dead and it doesn’t matter. 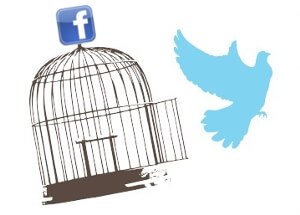 Google+ gives you a wonderful third option: easy control. For the past few weeks I’ve been adding people to my Google+ account and as I do I’ve been placing them into different categories. Family goes in one circle, business associates another. People are quickly sorted – the ability to place each into circles is integrated into the very notification that they’ve added you to their Google+ account. It’s so damn easy. And that’s just adding people. When you’re ready to share, whether it’s photos or comments or links, you are asked who you want to send the information too. I share travel plans with friends and family, I send out important reminders about articles to business associates, and when I post an article I share it publicly so that anybody can read it. Comments and +1 tags on shared items stay within the people the item was originally shared. It’s all as private as you want, and it’s all easy, easy, easy.

Plus, I can use the same circles to manage information as it comes to me. We all have that friend on Facebook who over shares. Stories about the latest celebrity, detailed descriptions of bowel movements, a blow by blow account of their lunch – I love these people, I hate their news. Now I don’t have to wade through it. People whose updates I really value go in one circle. More than one circle, actually, as I like to divide that news up into categories. I can read the updates from that circle whenever I want, and it’s as pristine as a I want to make it. When I want to catch up with my more gabby friends, well hey, that stream is still there ready for me to explore.

Coming in or going out, Google+ lets me control my information. And I can tell you, after just a few weeks, I don’t want to go back to the old system. I can’t. True, I’m still managing my Facebook account, but I’m not reading my news feed. I’m slowly finding those tweet feeds on Twitter that I really like and hunting down their equivalent users on Google+ (many have already moved, and the usual suspects top the list of early adopters ). Hopefully by the end of the summer I’ll have all my social media news coming through Google+, filtered just the way I like it. Because, why not, it’s MY social network, right, it should behave the way I want it.

Part of what I’m learning as I migrate over to Google+ is how compartmentalized my social networking already was. I like Twitter, but my feed has become so flooded that I really can’t make much sense of it anymore. Which means I’m really only using Twitter to let people know about articles I write or when I’m on location somewhere for a business event. When it comes to Facebook, I have much the same problem, but with a different result. I’ve got too much inflow, and I’m paranoid about where my ‘likes’ and comments are going, so I don’t have much outflow. In fact, because I have really insane friends and also want to use Facebook for business, I had to shut down my wall (drunk friends leave horrible graffiti, just saying) and start restricting access all over the place. Because of all the road blocks I had to throw up to keep my business and pleasure separate, Facebook has lost most of its use to me. It’s little more than an advanced version of Flickr – just photo sharing. LinkedIn…ha. I’m not really sure when the last time I checked that account. Anything I can do on LinkedIn, I’ve been able to do on other social networks instead. And Google+’s ability to separate business from pleasure is only going to make that more true moving forward. Maybe that’s why LinkedIn CEO Jeff Weiner told SlashGear that he doesn’t think there’s room for Google+. Wouldn’t want to be in that guy’s shoes right now.

My personal journey in social media has me re-evaluating what all of us are doing on these networks anyway. Why are we here? I think the answer is: for every possible reason you can imagine. Business, pleasure, reading, writing, finding new friends, looking at photos…I mean it’s really about having an entire digital life inside an ever evolving digital ecosystem. Like any organism, I think social media needs to adapt or die. Google+ is doing that. It’s making itself as flexible as it can, as controllable as it can, and as easy as it can. My social network was compartmentalized, and Google+ lets me put all those compartments in one place. When I want to share with friends, I use my friends circle on Google+ (good-bye Facebook). When I want to network with business associates, I do that through a different circle (good-bye LinkedIn). When I want to share information openly with people who follow me, I just make my posts public (good-bye Twitter). I’m slowly migrating photos (good-bye Flickr and Facebook), and all my videos are ready to view when I want them (good to see YouTube’s only a click away).

I’m already feeling comfortable with my settings, and I actually enjoy adding more people to my social network. Not because I’m rushing to increase some arbitrary friend counter, but because I know how to customize what I provide and receive from every person in my circles.

Many people have speculated that Facebook simply has too much pull for a new social network to overcome, and, hell, Google certainly has had some spectacular failures in the past when they’ve tried to enter this arena. Yet I’m already a big fan of Google+, not just because of what it can offer in its features, but what it can offer just as a new (hopefully popular) social media site: a chance to start things over right. I’m custom building my new social network from the ground up the way I want, and that’s really attractive. So maybe that’s another thing we want from our social media: opportunities to start fresh.

I’m hoping it will stay fresh too. 20 million users in just a few weeks. That has to have Facebook, Twitter, and everyone else shaking in their boots. I like it when businesses shake in their boots, it means I’m about to get some really great deals. And Google, after problems with Buzz, Wave, etc, is definitely going to keep pushing itself to be better than all of its (more established) competitors.

Obviously there’s still a lot I’ll have to learn as I continue to explore and use Google+, but I’m excited about the journey. Anyone who wants to take it with me, there’s more than enough room in my Singularity Hub circle for you. Look me up. In the meantime, whatever social network you enjoy (or if, *gasp* you aren’t on any at all), use the arrival of Google+ to expand your expectations and fuel your demands. Whether you want to make the switch or not, Google+ will be good for everyone if we can leverage it to make all social networks better.