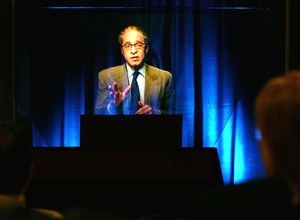 The Singularity Summit 2011 took place in New York this past October 15th and 16th. Once again the meeting was was filled with a lot of smart people, a lot of thought-provoking discussion, and a lot of futurists. The Singularity Institute has posted the videos from this year’s talks as well as videos from Summits past. We thought our fellow futurist friends might want to take a look at the talks. Scientists, authors, inventors, entrepreneurs, and of course Dr. Kurzweil provide so much fascinating discussion many different topics. Below there are just four presentations that I consider must-sees.

2008
The debate between Ray Kurzweil and John Horgan is an obvious must-see. Kurzweil sees technological progress as an exponential path, Horgan points out all the flat lines that he and science journalists ignore. Fireworks, guys.

2009
Anders Sandberg tells us what he thinks it would take to emulate the brain. It’s somewhat technical, but if you’re fascinated by the brain like I am, and fascinated by how tomorrow’s technologies might harness brain power, you’ll love this talk.

2010
Steve Mann’s talk is probably my favorite. Regarded by many as the world’s first cyborg, Mann discusses his concept of human intelligence. We have smartphones, smart elevators, smart light switches, what about smart people. He wants to take advantage of the supercomputers in our heads and, through wearable computers – most famously cyborg cameras – the human brain can be involved in the computational process.
And you definitely don’t want to miss the hydrolophone that allows you to play music by disrupting the flow of water.

2011
Michael Shermer, founder of Skeptic Magazine and a man who has appeared twice on the Colbert Report, gives a lively presentation. The material in his talk draws from four recent and thought-provoking books: Matt Ridely’s “The Rational Optimist,” Steven Pinker’s “The Better Angels of Our Nature,” Robert Wright’s “Nonzero,” and his own book “The Mind of the Market.” His message might be surprising to some, namely that things are getting better. He backs the claim up with a lot of interesting graphs on quality of life, individual earnings, justice, declining violence, etc. It’s a wide-ranging, entertaining presentation. It’s worth a watch just to hear his response to the question posed by his theist friends, “If you’re an atheist why should you be moral.”

But don’t stop there. Find your own nuggets of insight in this list of prophets and geniuses.