Don’t call it “Facebook for Scientists” – it’s not about socializing, it’s about knowledge. Academia.edu may appear to be a social network, but it’s actually focused on allowing scholars all over the world to publish their research papers and easily distribute them to anybody with a search engine. Academia.edu also meticulously tracks web traffic for each paper, generating hoards of statistics about who is reading what and when. This one-two combination of distribution and analysis makes Academia.edu a potent new force in research, and a growing presence among scholars all over the globe. The site has tripled in size this year reaching 800,000 registered users and more than 3 million unique monthly visitors. 2500 academic papers are posted and 3500 new scholars join every day! On top of that success, Academia.edu has just announced a breakthrough round of funding, attracting $4.5 million from investors including Spark Capital and True Ventures. Is Academia.edu the long awaited platform that will make open science a reality, speeding up research and bringing innovations to the public faster? 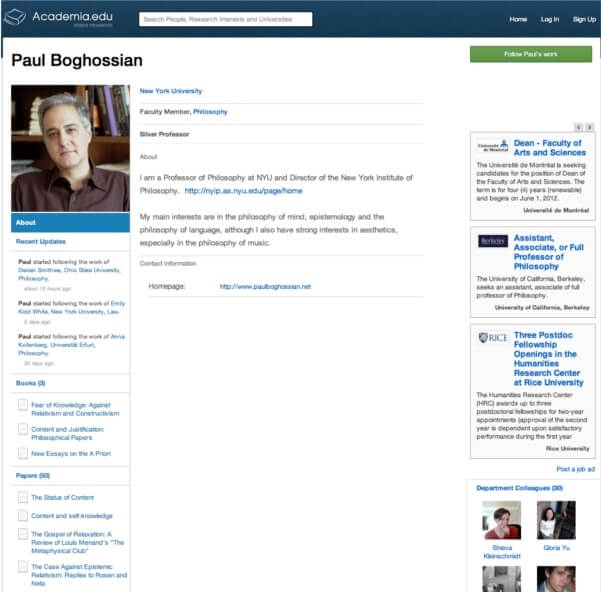 For now, founder Richard Price is focusing on utility, with an “engineering first” attitude and “a focus on the product.” He commented to Singularity Hub that what distinguishes Academia.edu from its competitors at the moment isn’t philosophy, but practicality. Every researcher needs to publish to survive. Grants, tenure, good staff – everything can depend on getting into the best scientific journal as soon as possible. Yet journal publication schedules are notoriously slow – it can take six months or more to finally have your results appear, if they are actually accepted for publication at all.

Academia.edu helps change that. Registered users can upload their complete (and journal-ready) papers and have scholars all over the world reading them in days, if not hours. The distribution cycle is reduced a hundred fold and even the most meager of scholars can have proof that they were the first to make their discoveries. Very importantly, Academia.edu makes their papers easily found via traditional search engines like Google. The distribution isn’t just inside the network, it’s to the internet at large.

If improved distribution is Price and Academia.edu’s primary product, analysis is a close and valuable second. Price recounted a sentiment he hears often from researchers – they never know who is reading their work. When a scholar is cited in another’s journal article, or when a fellow researcher approaches them at a conference and acknowledges their work it is a day for great jubilation. The hunger to be heard is palpable. To that end Academia.edu provides up to the minute analytics for traffic. Users know how often they have been read, the countries those readers originate from, the top papers in their CV, and even the time people spend on their pages. They also receive special notice when a paper was found through a general search engine – a good measure of a more widespread interest. This analysis is no trivial thing. Price has heard from users who are actually printing out Academia.edu statistics and including them in their tenure track submissions. With any online scholastic distribution system, but perhaps especially with Academia.edu, researchers now have quick and quantifiable evidence of the popularity of their work. 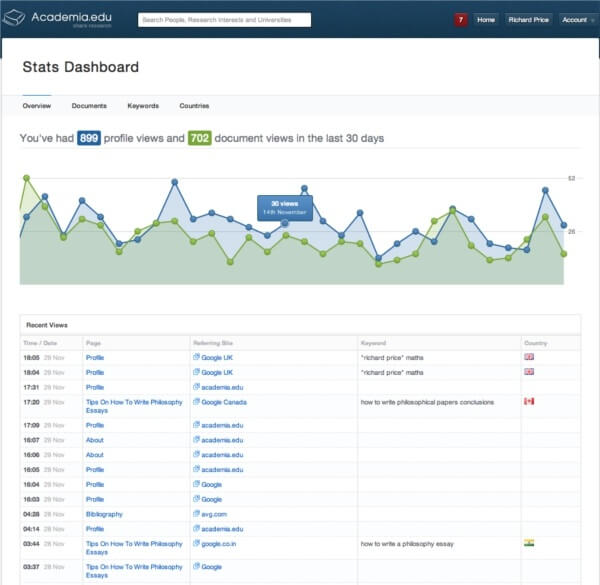 If Academia.edu’s basic premise seems very familiar, that should be no surprise – the concept is being explored in various incarnations by other sites such as Mendeley and ResearchGate. There is also a growing movement of researchers in favor of open science, with regular conferences and the like. The difference with Academia.edu is really in the focused execution. As Price says, “the problem we’re trying to solve is getting distribution down to hours, and including deep analytics.” For now the site isn’t pushing ‘microcontent’ like discussion boards or comment threads, nor is it ready to share raw data or code. It’s all about enabling and monitoring how knowledge is shared.

Price credits arXiv.org as a prime comparison and inspiration for Academia.edu. For those outside of math and physics, arXiv.org is a no frills open archive for sharing journal-ready papers in the hard(est) sciences. With arXiv, a physicist can deposit their paper on Monday and know that a majority of the people who would ever read the paper would have done so by by the end of the week. Distribution is fast, and a significantly large portion of scientists in these fields participate. In my days in the lab, arXiv was the “website of doom” because we checked it religiously to see if we’d been scooped by our competitors. Yet as Price pointed out, even that “website of doom” mentality is a good thing. Better to know you’re scooped as soon as it happens rather than six months later after you’ve wasted even more time and money.

If arXiv is its closest sibling in terms of focus, Academia.edu still got all the looks in the family. Despite Price’s protests that it’s not “Facebook for scientists”, Academia.edu appears as just that. Users get a profile page and a news feed. They can follow other researchers (as with Twitter), and they have an easy to navigate dashboard to peruse their analytics. The screen shots included here make it fairly clear, Academia.edu may not be focused on being a social network, but they certainly copied the design. 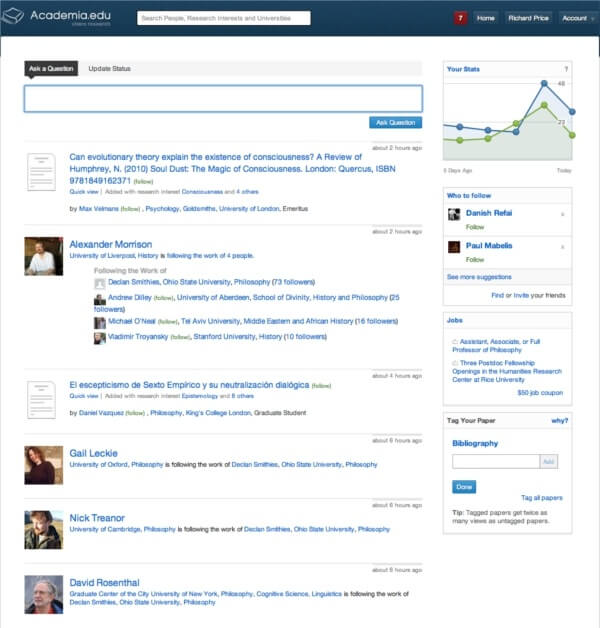 If Academia.edu wants to reproduce arXiv’s semi-ubiquity in math and physics but in broader terms, it needs to continue to grow. 800,000 is a big user base, but there are at least 7 million such researchers world wide. Thankfully, Price and his small team (less than a dozen at this point) have recently raised $4.5 million to add to their earlier $2.2 million from 2009. They’ve also been able to appeal to a broad base of potential users in terms of fields studied, education level, and geographic location. 45% work in the humanities, 31% in the hard sciences and 24% in social sciences. 30% are faculty, 40% graduate students or post-docs, and 20% staff. 30% are in the US, 40% in the EU, and 30% Asia. In terms of momentum, money, and multiplicity, Academia.edu is doing very well at this point.

And it could be sitting on a very lucrative fourth ‘m’, monetization. Price outlined his long term vision for raising revenue – sharing broad stroke analysis of research trends with large R&D investors. Billions of dollars are spent every month in academic funding. With the large database Academia.edu is creating, they could potentially give invaluable insight to these funding institutions so that they can respond quickly to developing trends. Again, there’s no need to wait months or even years to see what gets shared in traditional scientific journals. Within days of promising new research appearing on Academia.edu, large R&D investors could shift their finances. Price aims to help them do that, and use the ensuing revenue to help further the company’s goals of distribution and deep analysis.

For now, the credit Academia.edu most deserves is for their simple determination. Price has the classic Silicon Valley mentality – find the problem, develop the solution, make it better than everyone else’s. Academia.edu doesn’t do everything that open science should do. At least not yet. But that limited scope is still large enough to provide a very valuable service to 800,000 (and counting) scholars. They get quick and easy access to their colleague’s work, and they get quantifiable proof that their own research matters. Today, that’s a huge deal.

Tomorrow, I’d hope for something more. Price made it clear that he wants to eventually walk further down the path of open science, providing the arena for discussions (and learning how to credit people for ideas they generate therein), allowing the sharing of raw data, the open development of code, etc, etc. Getting the distribution cycle down to days instead of months is potentially revolutionizing the entire world of research. Transforming science into a real-time online event…that’s a vision that’s still far, far ahead of us. But it seems closer now than before.