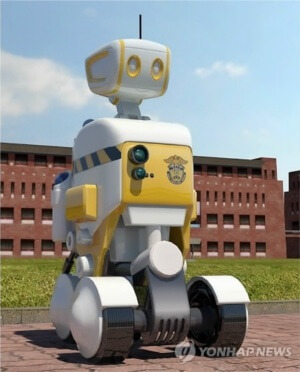 The South Korean Ministry of Justice announced that they would be adding three new security guards to a prison in Pohang. Normally that wouldn’t be news worthy, but these three particular guards happen to be robots. Developed by ETRI and Kyonggi University, the five foot tall four wheeled guards will patrol at night looking for suspicious activity in cells, and monitor prisoner health. Any situation that develops will be relayed to human guards rather than dealt with by the robots directly. The project cost 1 billion won (~$886,000 USD) and will begin with a month long trial in March of next year. If successful it will continue on at Ponhang and possibly the rest of the country. The inclusion of prison patrolling robots is just the latest example of how South Korea is looking to increase the reputation and range of its robotics industry, with new machines appearing everywhere from classrooms to battlefields.

While most of its physical systems are ready, the robots are reportedly undergoing improvements to make them more friendly and appealing to humans. That seems strange for prison guards but it fits with some of South Korea’s previous projects in robotics. Almost exactly one year earlier than this recent announcement, the South Korean Ministry of Education announced that they would place a robot in every kindergarten classroom by 2013. Many of those education bots allow for remote communication (telepresence) and are designed to serve as surrogate tutors to the young children as well as teaching aids. On the other side of the spectrum, South Korea has also developed automated gun turrets for its demilitarized zone with North Korea. Those turrets can detect soldiers and vehicles up to three kilometers away. The prison robots represent a sort of middle ground. Smart enough to detect movement, injury, or hostility from inmates but friendly enough to ensure their endless night patrols don’t overly provoke the prisoners. With South Korea’s dedication to finding new applications for its growing robotics industry it may only be a matter of time before similar machines are introduced into new fields.

But don’t get your hopes up: