A report out of India identifies four new cases of tuberculosis that are completely resistant to drug treatment. They gave all four patients, ages ranging from 20 to 57, the full first-line and second-line batteries of drugs. The first-line included four to five drugs and the second-line five to six drugs for the patients. The drugs had no effect.

When study co-author Zarir Udwadia from the Hinduja National Hosptical and Medical Research Centre in Mumbai, spoke to the New Scientist he sounded like he was reading a script from a Hollywood movie. “It’s estimated that on average, a tuberculosis patient infects 10 to 20 contacts in a year, and there’s no reason to suspect that this strain is any less transmissible. Short of quarantining them in hospitals with isolation facilities till they become non-infectious – which is not practical or possible – there is nothing else one can do to prevent transmission.”

Udwadia says mismanagement of the multi-drug resistant strain by both the government and private care givers is to blame. The emergence of people with strains resistant to some or all drugs, however, is simply a natural and inevitable consequence of antibiotic use. But while we should brace ourselves for similar reports in the future, places like Mumbai have plenty of room for improvement if they want to stem the tide.

The 110,000 people in India with multidrug-resistant tuberculosis are cared for by private practitioners. In a survey of 106 of them located in a Mumbai suburb, Udwadia concluded that only five private practitioners gave the proper prescription to multi-drug resistant tuberculosis patients. In fact, the four patients in the current study underwent analyses to determine prior treatment. The test revealed that three of the four had received “erratic, unsupervised second-line drugs, added individually and often in incorrect doses, from multiple private practitioners.” The patients received treatment from an average of four different physicians in an 18-month period in a desperate attempt to rid themselves of tuberculosis. According to the report, neither the prescription practices nor the qualifications of these private physicians is regulated.

And then there’s the cost. It costs just $20 to treat a patient with conventional tuberculosis. The drugs used to treat patients with the multidrug-resistant strain run between $2000 and $12,000.

Tuberculosis has already been a challenge for India. A World Health Organization report estimated that 110,132 multidrug-resistant tuberculoses cases arose India in 2006, accounting for 20 percent of worldwide cases. The report cites insufficient lab capacity as a major barrier to controlling the disease. 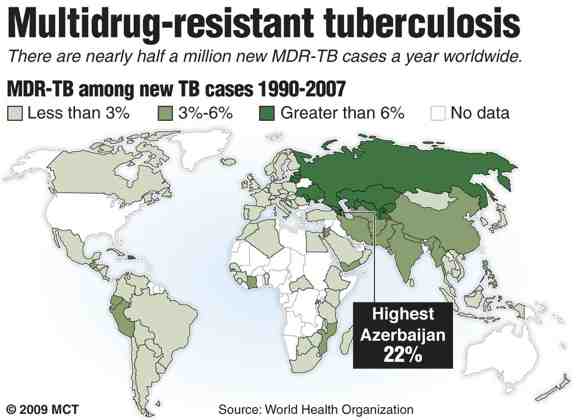 Which makes the India cases all the more disheartening. Again antibiotics misuse rears its ugly head. Antibiotic use leads to antibiotic-resistant bacteria. The susceptible bacteria is killed off while the resistant bacteria live to proliferate and infect another day.  Minsk, Belarus recently topped the charts when 15 percent of their multidrug-resistant population was shown to be extremely drug-resistant. There are some antibiotics used specifically to treat people with multidrug resistant tuberculosis. When those drugs are misused, the patients become resistant to even them, and become extremely drug-resistant. In 2007, about a dozen people in South Africa were diagnosed with extreme drug-resistant tuberculosis. They were sent on their contagious ways because the hospital didn’t have isolation wards.

So, where does this leave our highly interconnected world? Clinics haven’t actually run out of drugs just yet. Clofazimine and thioacetazone are two drugs that could potentially be used to treat the new form of totally resistant tuberculosis. The major drawback, though, are the drugs’ side effects. Clofazimine can cause discoloration of the skin, causing some patients to become depressed. In two cases, the patients committed suicide. And thioacetazone can cause the skin of people with HIV to peel off.

Another solution under consideration are sanatoriums, institutions in which patients and their immune systems do battle with the disease, quarantined safely away from the public. If that sounds familiar to you it’s because it was the best method for curing tuberculosis in the 19th century, long before antibiotics were discovered.

It wasn’t long ago that the WHO summarized the growing problem of anti-microbial resistance by saying, “The world is on the brink.” Well it certainly feels that way. An important question that, from where I’m sitting isn’t asked enough, is what really can be done about drug resistance? Tighter regulations and improved clinical practices will only slow the progression. Perhaps instead of focusing our efforts to stop their spread through policy, we should prepare for the inevitable and confront the daunting task of developing new antiobotics and new techniques to fight this terrible disease.