Movie Theaters Ramp Up For The Next Big Thing: Satellite Delivery Of Digital Films

Technology is taking over Hollywood, and in more ways than digital films and 3D movies. This year’s CinemaCon, the official convention of the National Association of Theater Owners, featured numerous shop talks and footage previews, but peppered throughout was a sense of the transformational power of technology for the film industry, to the delight of some and the chagrin of others (like Chris Nolan decrying the pressure to go digital). Amidst the studio execs vision casting and awards handed out to actors, an announcement was made about the return of the Digital Cinema Distribution Coalition (DCDC), a group of film studios (Warner Bros and Universal Pictures) and movie theater chains (AMC, Cinemark, and Regal) committed to reviving an old idea whose time may have finally come: satellite-based delivery of movies.

Stating that their efforts were a “logical and very important next step in digital distribution,” the coalition will experiment with their latest system in the fall of this year with a goal of deploying equipment to a large set of theaters starting in 2013.

Like nearly everything in Hollywood, this technological push is really about cash. With over 4,000 theaters in the U.S., celluloid-based movies have lost ground to digital films because it costs $1,500 to print a film on 35 mm but a tenth of that to make a digital version on hard drives. Yet those hard drives still have to be physically delivered to each theater, something which seems increasingly wasteful, inflexible, and unwieldly. A satellite-based system allows studios to upload movies whenever they are ready and even to adjust availability of movies and dynamic scheduling to their liking.

Because of equipment costs, estimates are that the new system will cut the price of distribution in half, which is good because the movie industry is prepared to cut costs wherever it can. Even though the first quarter of 2012 saw a 23 percent bump in domestic revenue, 2011 was a year of decline in revenue by 4 percent. With home theaters on the rise, digital distribution on mobile devices skyrocketing, declining sales of DVDs, and the narrowing release window of films, theater chains are desperate to work with studios however they can. AMC and Regal have committed to complete digital conversion by the end of 2012.

Digital distribution of movies via satellite is the bread-and-butter of services like DirecTV and Dish Network, but even for movie theaters, the concept isn’t new. It was in 2000 when the first movie, Miramax’s Bounce, was streamed via a Boeing satellite to an audience in Times Square. In 2004, Shrek 2 was streamed to an array of theaters by Microspace Communications, which has since become a leading provider of movie streaming after building a network of satellites to deliver films to more than 1,000 screens in the US. Microspace’s technology is similar to what the DCDC is proposing, in which a movie is delivered to a theater’s server for temporary storage, which then links to the digital projectors on-site.

It’s clear that this latest push is also about digital protection of movies, both in terms of securing movies before their release and laying the foundation for future technology potentially allowing studios to stream directly to individual projectors, bypassing the server storage step and make it very difficult for films to get into the hands of torrent sites. Considering that 62 percent of the film market is outside of the U.S., satellite delivery could not only protect movies from getting into the wrong hands, but it could eliminate the delay in overseas release, and capitalize on the growing rise of digital theaters: 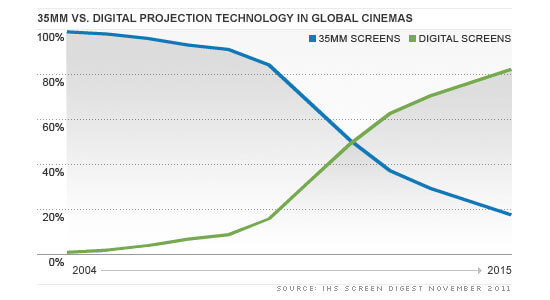 The possibility that a satellite-based system could help expand what movie theaters traditionally offer is intriguing and just might be what keeps them from phasing out entirely in the long term. The DCDC is already behind the streaming of live performances by the New York’s Metropolitan Opera. The program, The Met: Live in HD, has been delivered via satellite to select movie theaters across the US, Europe and Australia since 2006 to much acclaim, but at a lower quality than the latest digital films demand. Megachurches and corporate events have utilized live streams to theaters too. Film festivals, such as Sundance or the Disposable Film Festival, could involve a much larger audience unable to travel to the locale. Other events, such as awards ceremonies like the Webbys, ComicCon and other popular conventions, professional game tournaments, and sports competitions could all be streamed live into the theater, which would make fan bases even larger and allow theaters to run ads from an entirely different set of marketers. And that’s not even considering emergent technologies, like interactive gaming that could tie directly into movies. Imagine going to a theater to watch the latest zombie film and after the movie ends, play a last man standing game with everyone else in the theater trying to survive against a charging zombie horde.

These and other opportunities are coming soon (pun intended) and can enhance the movie-going experience, especially to the “new, younger, ‘connected consumers'” as targeted by Chief Executive of the Motion Picture Assn. of America, Christopher J. Dodd.

Whether the coalition’s latest venture will become the new standard or another system that utilizes faster physical networks arrives, movie theaters must transition into a new position in society to remain viable. Instead of being the sole distributor of the latest film as they have been in the past, movie theaters can leverage new technologies and their venue to become the place to meet for affinity groups, providing services that accompany the group experience and hosting events around people’s interests for movies and beyond.

That theaters have been slow to change their paradigm is tragic, as they are now forced to catch up by embracing satellite technology that has been around for 50 years. But as the physical and virtual worlds continue to converge, consumers look for new ways to connect to others and movie theaters are in a prime position to assist in making that happen.

After all, it won’t be long before the re-release of movies in 3D will get old…real old (yeah, I’m looking right at you, Titanic 3D).