Last Friday evening, I had the pleasure of attending the Closing Ceremony of the Graduate Studies Program at Singularity University (SU). This event is the pinnacle of a marathon-like 10-week program, in which 80 of the most promising and talented individuals from 36 countries have been challenged to change the world. And the students did not disappoint. Innovations in global health, emerging technologies, infrastructure, education, employment, and poverty were presented to the distinguished crowd, and no doubt many of these ideas will translate into real companies and movements in the coming years. 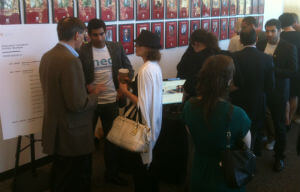 The GSP12 program launched back in June (you can watch a highlight of the Opening Ceremony here), and for almost two months, the class has experienced a crash course in innovation, with more than 160 lecturers sharing their experience and insight through intense days and long nights, including SU co-founder Ray Kurzweil. But only two weeks ago, students organized into 21 teams with the task of harnessing what they had learned to develop a core innovation that would positively impact a billion people in the next decade. At the ceremony, the teams shared their visions that showcased the power of technology to tackle the world’s grand challenges.

You can find short synopses for each team innovation here.

Even though the first GSP was in 2009, the first three classes of students have already produced some incredible successes. For example, Jessica Scorpio, a member of the inaugural GSP class, wanted to tackle the problem of transportation, so she co-founded Getaround, the car-sharing service that recently raised nearly $14 million is a Series A funding round. Students from GSP 2010 started Made In Space, a company that uses 3D printers to manufacture components for space in space. At GSP11, Matternet was founded, which is creating a platform to use unmanned aerial vehicles to deliver goods and aid in developing countries.

With the previous GSP classes launching successful startups, it’s no wonder that students were feeling the pressure from the high expectations for this year’s class.

Prior to the Closing Ceremony, an expo-style display area was set up where each team had booths to discuss their projects one-on-one before everyone filed into the auditorium for the formal event. The teams presented throughout the night to a standing-room only audience while guest speakers provided insight into innovation, how to bounce back from failures, and the ways that technology can help meet the needs of people worldwide.

Here’s a video that provides an overview of the event:

The evening was inspiring and a great success, so it’s worth recounting in greater detail what you may have missed.

The introductory remarks were provided by Rob Nail, SU’s CEO. Fresh out of the gate, Rob spoke about his own feelings after participating in a 2010 Executive Program at SU saying, “As an alumni, you really don’t want to leave. You get here and realize the level of thought, the types of problems, and potential impact we can make as a community. It’s where you want to spend the rest of your life.” SU’s foremost program is the Graduate Studies Program, and students love the experience so much that he jokingly said they have to figure out how to get students to leave. Through interactions with students throughout the summer and watching their projects evolve during the short window they’ve had, his confidence in this class was high: “I anticipate and fully expect that many of the ideas that you see here tonight will translate into companies, social movements, and projects that are going to spread all over the world.” 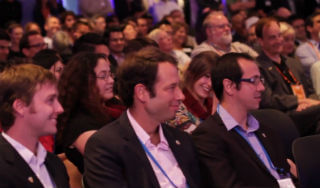 The 22 team presentations were emceed by Amish Parashar, Director of Innovation & Strategy at Triple Ring Technologies, who served as a team project director for this year’s program. Amish started by helping the audience get some context about the program and the students who were present saying, “We had something like 3,000 applications this year for 80 spots. These students came into the class roughly 9 weeks ago never having met each other, and at the end…we ask them to create something.” Wanting to ensure that the focus on the event was not about the best speaker or team video, he spoke about how the emphasis should not be on polished presentations but on the world-impacting concept: “If we build something valuable and focus on that core innovation, then the presentation, the business plan, and the venture will come from that core.”

Having only had roughly 2 weeks to devise core innovations that would impact one billion people in 10 years, the students took the stage in four waves to present their proposals. Witnessing the presentations was like watching Cirque du Soleil: there is amazement and awe at the performance you are a part of, because the truth is, these core innovations have the potential to shape the future today. 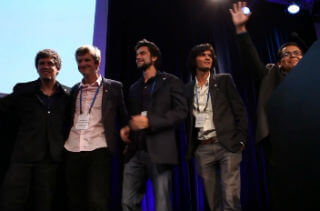 Some of the teams had clearly thought deeply about their project and carved out attainable objectives for transitioning their ideas into reality (you can read the team descriptions here). One of these was Med Sensation, which developed a Tricorder-like glove prototype that contains numerous sensors for doctor’s to use during physical exams. Others had high aspirations for what they could achieve, such as WiFli that is aiming to connect everyone in the world to the Internet, Ubertas that is looking to build near-city offshore farms, and UrbiAnalytics, a project to use big data from the public to improve government. Another team, The Blackest Sheep, had impressively already nailed down over 100 corporate partners, including Coca-Cola. Finally, an ambitious project that is desperately needed and yet is likely to have a tough road ahead is Clinical Sense, which looks to use smartphones to improve patient enrollment, participation, and communication to improve the success and speed of clinical trials.

In the middle of the presentations, the keynote speech was delivered by Beth Comstock, Senior VP and Chief Marketing Officer for General Electric, who leads the company’s growth and marketing innovation initiatives. Her talk addressed the question “Why do we take on challenges?” To answer, she paraphrased Thomas Edison, founder of GE, “‘I look to what the world needs, and I invent,'” and added, “True grandeur comes from connecting to a need — it’s not just doing something because we can.” Optimistic about the future amidst the shift in numerous sectors that is occurring globally, she conferred the title of “The Great Rebalancing” on these times, even as she acknowledged the constraints, disparities, and skills deficits that prohibit growth. But she was also quite optimistic, saying, “What a time to be an innovator, to be taking on these incredibly grand challenges.”

The address to the GSP12 student class was delivered by the GSP12 Director David Roberts, who was a GSP10 alumni, helped run team projects at GSP11, and is now VP of Community Development at SU. His talk centered on his own personal failure, relaying some pretty funny stories from his youth detailing his unsuccessful attempts with a ninth grade chemistry set and a book he later received called The Poor Man’s James Bond. But he encouraged the GSP12 students saying, “All of you have these amazing projects…[but] some of them are going to fail. I want you to know that we’re in this with you for the long haul.”

Roberts then introduced Jack Andraka to the stage. Jack is the amazing 15-year-old recipient of the grand prize at this year’s Intel International Science and Engineering Fair for developing carbon nanotube-based diagnostic sensors that accurately detects pancreatic, ovarian, and lung cancer biomarkers and cost only 3 cents. He told the audience how he was turned down by nearly 200 professors, but one researcher gave him a chance to test his idea and after 7 months, he had a breakthrough. Jack schooled everyone in the room about the kind of perseverance and commitment that leads to innovation.

This year’s elected class speaker was Tiago Mattos, co-founder of Perestroika, a school of creativity in Brazil, and a TEDx speaker. With a personality that filled the auditorium, Tiago began by telling the class “after 9 weeks, we’re going to sleep!” Then, rather than giving a traditional commencement-like talk, he delivered a crowdsourced speech containing reflections from the GSP students about their experience this summer — a first at SU. The story goes that Tiago set up an online shared document asking his fellow students to summarize their summer experience at SU, and the speech then grew to have a life of its own. It was awesome and hilarious, full of both wisdom and bittersweet moments, but had a cohesiveness that reflected the bonds that the students made during the program. One notable comment was “This speech is an analogy of our new roles. It is giving power to the crowds, but it is also an analogy of singularity — a community that respects and gives voice to everybody.”

Capping off the formal event, Peter Diamandis, the founder of the X-Prize Foundation and co-founder, vice chancellor, and chairman of SU, addressed the crowd by beginning with an important observation: “the world is changing so fast, and the question is, is education keeping up with it?” To capture what the university is about, he enthusiastically stated that “What we are is an institution focused on giving people what they need now more than ever, and this is the inspiration and the tools to help address the world’s biggest problems…today, any one of you can develop a technology that can positively impact the lives of a billion people. And if you can do that, why would you not?…You can and let no one tell you you cannot.” As someone who puts his money where his mouth is, Peter concluded with “We are living in a day and age when we can live in a world of abundance…and the best way to predict the future is to create it yourself.”

Overall, in just two short hours, a whirlwind of future technologies were profiled, and it was clear that the GSP12 students have undergone a paradigm-shifting experience. Many great ideas were presented to help solve problems related to clean water, affordable food, health, unemployment, effective government, and even reducing the impact of war. Here’s hoping that many of these ideas can come to fruition, and soon.