A major earthquake strikes a town leaving power plants damaged, water pipelines broken, and roads blocked. How will people get clean water? A new startup says it has the answer.

TOHL, which stands for Tubing Operations for Humanitarian Logistics, has developed a simple method to deliver fresh water for emergency relief: install a really long plastic tube with a helicopter. And it works. The first trial run demonstrated that 1 km of high-density polyethylene pipe could be laid down over mountainous terrain and in windy conditions in just nine minutes. It’s a rapidly deployable solution with low labor cost and overhead. We even have an inside scoop from VP of Engineering Melissa McCoy about the company’s plans.

Using Kickstarter to raise $30,000 for the next phase of development, the team wants to expand the uses of their approach (such as water for agriculture and fuel for the military), improve equipment design to accommodate tube variations, and make their mobile infrastructure operation scalable and commercially ready.

It’s just one example of how low-tech approaches can sometimes be the most elegant, straightforward solutions.

The question is, how much water can this system actually deliver? According to McCoy — who recently graduated from Singularity University — the system can be configured in a variety of ways, depending upon demand. When using a small capacity helicopter, she stated that “TOHL has the ability to install multiple pieces of small diameter tubing and provide a total flow rate in the range of 7 to 70 liters per minute, conservatively.” Larger helicopters that can carry a greater load could deploy larger diameter tubing, thereby increasing the flow rate delivered to an area “to many multiples of 70 liters per minute.” She added, “If we assume that the average person needs a minimum of 1.3 gallons (5 liters) of water per day to survive in a moderate climate at an average activity level and we’re delivering 70 L/min, then that means water will be provided for 20,000 people per day. This is a best case scenario.”

The team put together a short documentary about their first live deployment with help from the Red Cross to test their method:

Catastrophic natural disasters, such as Hurricane Katrina, affect infrastructure in a variety of ways. The problems created by these events are fixable if they occurred independently, but in combination, the scale of the disaster escalates quickly. For instance, water pumps and waste water treatment plants rely on electricity, so when power is lost for long periods of time, reserves are depleted and bottled water must be transported into the zone, usually by truck. However, if roads are flooded or destroyed, rapid and widescale relief becomes near to impossible.

Now laying a pipe with a helicopter has its challenges. First of all, the helicopter is actually anchored to the ground during installation, so the spool must be engineered properly to avoid any significant tension in the line or the helicopter will be in jeopardy, especially in unstable weather conditions. Another issue is finding the right tubing that is flexible enough to wind up on a spool but resilient enough to not bend or break, either from internal fluid pressure or by being cut by plants and rocks on the landscape. Finally, the system must steadily extend the tubing to avoid stuttering and buckling that can occur when there’s too much slack.

Because of how quickly the homogeneous pipeline can be installed, TOHL is ideal for disaster relief, but the system can be used for longer-term scenarios, such as setting up refuge camps. Though the tubing laid on top of the trees during the test run, more permanent pipelines can be installed by laying a tube along roads or rivers, digging a trench, and burying it. Installations along roads opens up the possibilities of using trucks to lay the pipeline, as well. The pipelines could also be used to deliver other fluids, such as fuels, as long as the material is resilient to whatever flows through it. 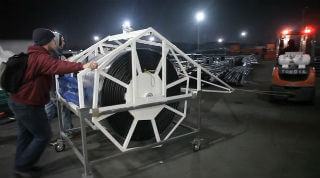 The company got off the ground initially with an Indiegogo crowdfunded campaign for $5,000 back in March followed by $40,000 from Start-Up Chile. Since then, it formed a partnership with Ecocopter, an ecotourism company that has been “providing helicopter services for free and advising us on technical issues,” according to McCoy. TOHL also has a partnership with the Chilean Red Cross, whose land was actually the site for the first test, that has led to planned installations of 8 km of pipeline in two municipalities to aid families. Recently, it had its first sale to install 15 km of pipeline to SQM Inc., a large mining company in Chile where McCoy was an intern in 2010 while studying at Georgia Tech.

The Kickstarter campaign will help the team make some fundamental improvements to the system, especially the tubing itself. McCoy said the team is looking in to “reducing the density of the material without adversely affecting structural strength.” This would be help reduce the overall weight of each spool, which would reduce the load for multiple tube deployments, for example. She added, “It is also important to investigate materials that are more tear resistant, against potential acts of vandalism during operation.”

TOHL proves that innovation isn’t limited to high tech solutions. In fact, cheap plastic tubing has been around since the mid 1950s, so it isn’t the materials that are noteworthy, but the foolproof system being built and the potential for global rollout that are significant. President and Director of Operations Benjamin Cohen admits in the Kickstarter video that “TOHL’s technology is very simple, but we can’t believe that no one has ever done it before.”

Getting clean water to people in need in an fast and efficient way is a no-brainer, but now TOHL is providing the solution to make this a reality.