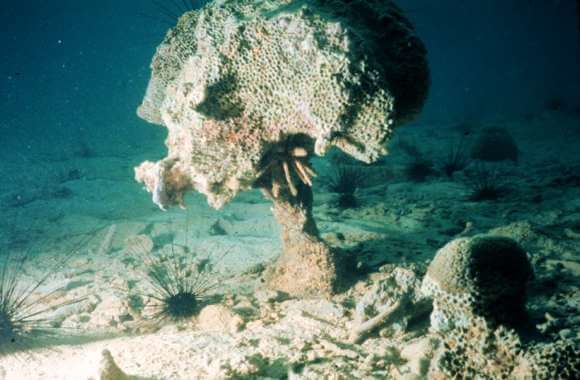 The news ain’t so good from the Great Barrier Reef.

According to a new study, the massive reef has lost half of its coral cover over the last 27 years. Damage from storms, bleaching, and a species of starfish that feed on coral are overwhelmingly to blame for the loss. Forces of both nature and man contribute, and if these processes continue to go unchecked the Reef’s coral cover could be decreased by another half by 2022.

Over the same period as the current study, coral reefs in the Caribbean have diminished a staggering 80 percent. The prospects for coral life are so dire that some scientists have accepted the eventual calamity and have begun freezing away polyp material for a post-’reef armageddon’ revival.

As humanity continues on the path of increased industrialization and technological advance our environmental impact on the Earth also continues. The Great Barrier Reef’s decline can be looked at as a canary warning that our influence on the world’s delicate ecosystem is increasing. Will carbon dioxide emissions and pollutants become more deadly to the Reef and the world as a whole in the future? Where do we draw the line on how much of the Earth we destroy? Our technologies will continue to advance and, sadly it seems, so will our inability to shape how that technology affects the environment.

The study concluded that the loss of half of Great Barrier Reef degradation over the past 27 years was due mostly to storm damage (48 percent), Crown-of-thorns starfish (42 percent), and bleaching (10 percent), the loss of pigmented algae that the coral need to survive. A total of 214 reef sites were surveyed. Those sites showed a coral cover decrease from 28 percent to 13.8 percent between 1985 and 2012. The degradation appears to be accelerating, however, as two-thirds of coral cover loss occurred since 1998. A mere three out of the 214 reef sites showed no change over the monitored period.

Carried out by researchers at the Australian Institute of Marine Science (AIMS) in Townsville and the University of Wollongong, the reef monitoring program that provided the study’s data is considered the world’s most comprehensive. It began in 1985 with surveillance of more than 100 reefs. Since 1993 another 47 reefs have been added to the survey. Over $50 million has been spent on the program which includes more than 2,700 research days at sea monitoring the reefs.

One interesting finding was that different areas of the Reef were affected to varying degrees by the three factors. Coral cover in the northern Great Barrier Reef has actually remained quite stable over the last decade while the significant damage occurring in the southern region over the same period has been due mainly to storms. The edge of the Reef has been the main target of the Crown-of-thorns starfish, and coral bleaching has accounted for some damage in the northern and central regions.

John Gunn, CEO of the Institute thinks something can be done. As he stated in a press release, “We can’t stop the storms, and ocean warming (the primary cause of coral bleaching) is one of the critical impacts of global climate change. However, we can act to reduce the impact of Crown-of-thorns. The study shows that in the absence of Crown-of-thorns, coral cover would increase at 0.89 percent per year, so even with losses due to cyclones and bleaching there should be slow recovery.”

Scientists at the Institute are now focused on finding out all they can on Crown-of-thorns’ life cycles to better predict and try to head off population explosions. Data shows that there’s been three major outbreaks of the starfish over the past 40 years. They typically begin in the Reef’s northern region and, over the span of about 15 years, migrate to the south. Reefs can recover between these outbreaks, but they take about 20 years to do so.

The prospect of losing the Great Barrier Reef is alarming on multiple levels. At the very least, it would mean losing a 20,000 year old reef system harboring some of the planet’s most biologically diverse ecosystems. It’s the world’s largest reef system with over 2,900 individual reefs and 900 islands that stretch across approximately 133,000 square miles (344,400 square kilometers), making up 60 percent of the world’s total reef coverage. About one-fourth of all marine species make coral reefs their home and coastal people largely depend on that marine life for their livelihood as well as a barrier against destructive hurricanes and tsunamis. A degrading Reef is also bad for the economy. Through mostly tourism and fisheries the Reef’s net value is about $30 billion. Moreover, the biodiversity harbored in reefs represent a rich and untapped source of potential medicines to cure cancer, arthritis, and other diseases.

But is there really any hope of slowing the Crown-of-thorns? While the adult Crown-of-thorn feeds on coral polyps, its larvae feed on phytoplankton. Phytoplankton, in turn, multiply in the presence of fertilizers and other man-made pollutants commonly found in coastal runoff. Simply by decreasing pollution in these areas would benefit coral growth. But Asia, especially burgeoning China, depends largely on Australia’s raw materials to feed its economy. Can we reasonably expect Australia’s industrial machine to slow down or take costly steps to decrease pollution to help save the Great Barrier Reef? Probably not. And the fact that reefs all across the world are dying means the problem is not just an Australian one. Industries the world over are products of humanity’s technological advance. There’s simply no way it’s going to slow down, and try as they might, I think scientists, governments, and philanthropists will be powerless to stop it.