Tal Avitzur may be a math professor, but one look at his workshop reveals his other passion: scrap metal robots. For the last few years, he’s been finding other’s people junk and turning them into robot-themed works of art.

“It’s become an obsession,” he confessed in a recent email to me. “Figuring out how to connect parts that were not meant to be connected stimulates the brain in a way that I hope will help keep it active.”

The robots stand 1 to 4 feet tall and are further brought to life by the installation of LEDs. On his website, Tal lists the materials that were used to construct each robot. When asked about how he comes up with his ideas, he remarked, “What I create is totally dependent on the parts I find. So, unlike other sculptors, I do not first draw what I would like to make, as it is possible I would never find the parts needed.”

But why robots? “From the parts I find, robots are easier to make than talking apes,” he quipped.

“The parts I choose to collect for my projects (from the thousands at the scrap yard) evoke a body part for a robot, most likely from my preconceived ideas based on the books and movies from my childhood.” One look at his collection and you too may see hints of classic robots like Robby from Forbidden Planet, Gort from The Day The Earth Stood Still, Star Wars, and other movies. Additionally, he’s a sci-fi reader and even had the pleasure of meeting Ray Bradbury at a dinner party in 1997 and having him sign a copy of “The Martian Chronicles”.

Although formally educated in mathematics (he teaches at Santa Barbara City College), Tal was drawn to artists and found himself around them once he moved to California. After deciding to remodel a broken down house in Santa Barbara and visiting local junk yards, he came across varied and wonderful scrap that had been thrown out by local research labs, universities, and the shipyards. So he started to salvage interesting finds, especially old aluminum and brass materials. “What I find appealing is preserving vintage tools and appliances that are on their way to the smelter, and giving them a new purpose,” he said.

And his stockpile grew, until a friend noted that he had enough stuff to produce the props for a Dr. Frankenstein movie. That’s when the gears began to churn. He started making robots out of scrap to justify having a large collection of parts in his workshop and to have “cool things for the house.” Now years later, his workshop is a testament to just how much scrap he has recovered.

While Tal doesn’t consider himself a formal artist, his hobby of repurposing scrap metal has produced quite an amazing portfolio of work.

The recent interest in his creations from the public has been most welcomed, and he’s receiving calls from people who want to see the robots and his workspace. Remarking on why the public is so interested, Tal said, “”Perhaps people like the promise of how robots can make a better life for humans.”

The following are just a few samples from his collection that profile some of his creations: 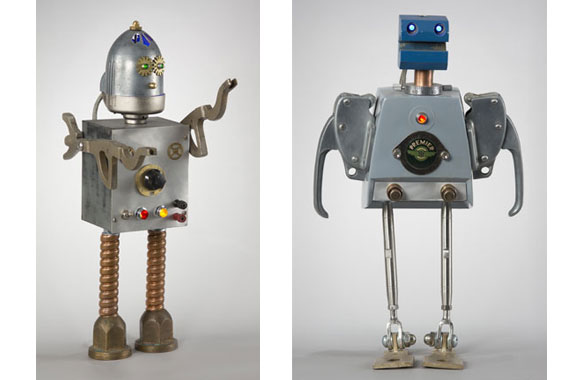 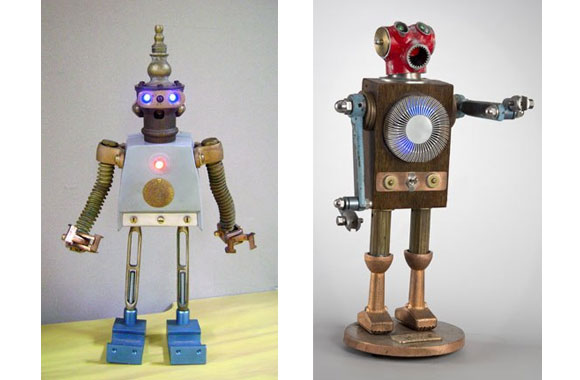 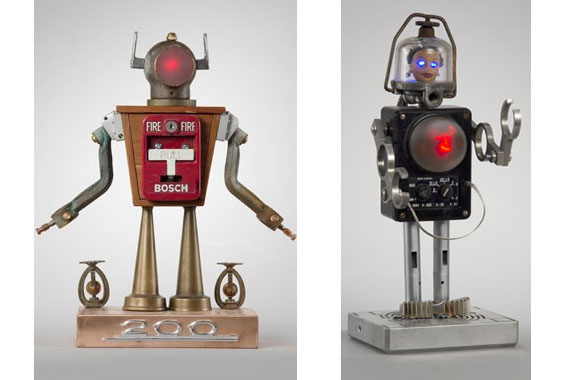 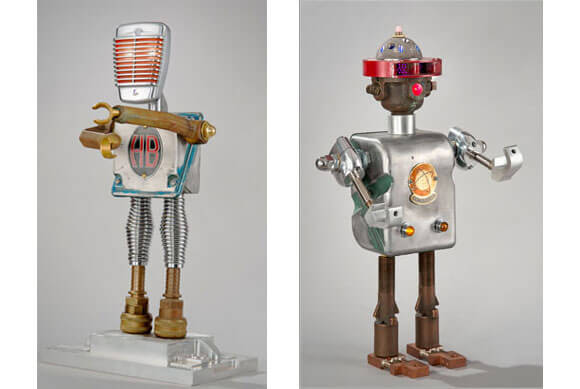 Two of the robots, Primo and Jabs, have even been profiled in their own video:

You can also watch the following video of his workshop to get a sense of where he works and what other creations may be on the horizon:

He’s not ready to quit either. “Making them is loads of fun. I find myself quietly laughing as I put parts together. Each robot seems to have a personality all its own. Exhibiting at galleries takes time away from the workshop, which is where I really want to be. I plan to just keep on making them.”

If you want to see more of his cool creations, check out his website at talbotics.com or the Talbotics Facebook page, which is loaded with great pictures of the materials that Tal uses in his works.