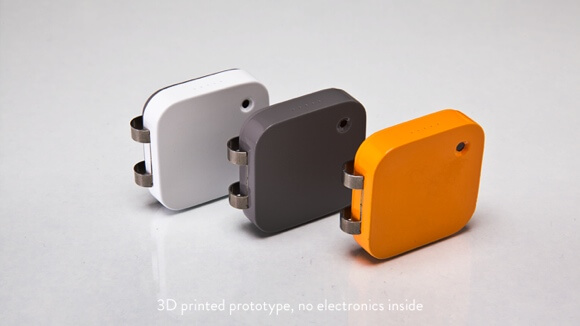 Here comes yet another tool for lifeloggers to catalogue those priceless moments of getting a cup of coffee or commuting to work. Memoto, a small, clip-on device that takes pictures while you live your life, is part of a Kickstarter campaign that crushed its goal on the day it launched. The simple, nonintrusive Memoto could very well be the device that makes lifelogging mainstream.

The production team put four months of work into designing the mechanics, electronics and firmware and fitting them into a compact device that’s non-intrusive and tough enough to withstand the rigors of everyday life. Like a lot of other lifelogging devices, Memoto doesn’t just take pictures but also registers your GPS position, so you know exactly where those pictures were taken. Two geo-tagged, 5 megapixel pictures are taken per minute and a special app also organizes your images into a timeline. It also has a built-in accelerometer so your images stay oriented correctly even if the device isn’t. One cool thing about Memoto is that is has no buttons – it snaps pictures when you’re wearing it, shuts down when you’re not. It connects to a computer via a micro-USB port for downloading images and recharging. And it’s compact casing is also tight enough to keep working even in inclement weather.

Memoto also offers a storage solution that’s not the hard drive on your computer. For a flat monthly fee you can store your data – up to 4 GB per day, which is 1.5 terabytes per year – on their own storage service (Kickstarter backers get the first year free). Because they’re geo-tagged the images can be searched based on location and time, which means you can retrace your steps right from a smartphone or browser and find those damn car keys. The images can also be shared (voluntarily!) through Facebook and other social networks.

Lifelogging is an idea that still strikes many as a tad extreme. But if Memoto’s Kickstarter success is any indication, it seems that people are getting used to the idea. They surpassed their initial goal of $50K just five hours after launching! At the time of this writing Memoto has 1,103 backers pledging $205,681 – and there’s still 36 days to go until the campaign ends on Nov. 30.

Probably a lot of people who were curious about lifelogging are drawn to Memoto’s simplicity – clipping a small box to your shirt is whole a lot less intrusive than a camera surgically on the back of your head. It’s also affordable: pledging $199 ($80 off list price) gets you a Memoto in your choice of Arctic White, Graphite Gray and Memoto Orange. But act now eager shoppers, there are only 23 discounted Memotos left!

Like many things new, what seems extreme one day goes unnoticed the next. Memoto seems to be the device for both the initiated and the curious. No doubt we’ll see similar devices from companies trying to get in early on such a young market as people get used to seeing them, wearing them, and accept that lifelogging won’t remain on the fringes forever.