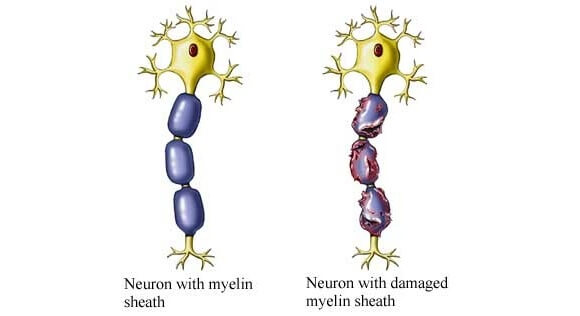 There are 2.1 million people worldwide suffering from multiple sclerosis. It is thought to be an autoimmune disorder in which the immune system attacks the body’s own nervous system. To date there is no known cure. At best, some therapies can slow the progression of the disease. The array of symptoms, such as loss of muscle control, some vision and widespread pain plague patients. Desperate, some of these patients are turning to a treatment that is widely condemned by experts in the MS field. The treatment, pioneered by an Italian surgeon, also has powerful support from a small handful of practitioners and patients continually in search of options.

The layer of cells surrounding neurons, myelin, have been shown to be damaged in the brains and spinal cords of MS patients. Myelin serves as an insulator for neurons and is vital to the ability of neurons to pass electrical signals to one another. When they’re damaged, as in MS, signaling between neurons is impaired, resulting in lack of bodily control, pain, and other symptoms.

Most researchers and clinicians attribute the myelin damage to autoimmunity, the cause of which still remains uncertain. But Paolo Zamboni, a vascular surgeon at the University of Ferrara in Italy, disagrees. He doesn’t think MS is primarily an autoimmune disorder. Instead, he hypothesizes that the disease is caused by chronic cerebrospinal venous insufficiency, or CCSVI, a vascular disorder that results in the insufficient drainage of blood from the brain and spinal cord. Zamboni thinks that the accumulation of blood in the brain causes a buildup of iron and that the iron damages the layer of tissue surrounding neurons, myelin.

Zamboni published a study in 2009 in which he found CCSVI to be present in 100 percent of M.S. patients at a particular stage in the disease. Following the finding he tested a treatment for M.S. that included inflating a balloon to open the veins that carry blood away from the brain and thus restoring normal blood flow.

But there were problems with the study. First, with only 65 subjects, it wasn’t large enough to reach a robust conclusion about whether or not the treatment was effective. And even though the study compared the treatment between people with MS and healthy controls, Zamboni wasn’t blinded to the groups – he knew which participants had MS and which did not, making bias a serious concern.

But for many patients these concerns paled in comparison to the possibility, no matter how remote, of being cured. In the face of this new demand the procedure spread quickly. The first neck angioplasty for MS in the US was thought to have been performed in 2009. The unproven procedure was restricted in many countries, but patients could still travel to the US, Costa Rica, Poland, Bulgaria and Egypt to have it performed.

Patients also generated pressure to investigate the link between CCSVI and MS, eventually prompting the US National Multiple Sclerosis Society to announce in 2010 that $2.4 million, or about 7 percent of its research funding, would support research on CCSVI.

Robert Fox, medical director at the Mellen Center for Multiple Sclerosis at the Cleveland Clinic, was not impressed. As he told the New York Times, “People without a scientific background often view all scientific papers with equal weight. Well, scientists don’t. I don’t know of a more prominent example where there’s been such profound pressure, driven by a nonmedical and nonscientific – though rightfully very self-motivated – constituency on what specific treatments should be explored with weak scientific basis.”

Zamboni isn’t the only one to look into CCSVI. The largest study to date was performed by Robert Zivandinov at State University at Buffalo. He did find an association between CCSVI and MS but at just 56 percent association compared to 23 percent in healthy controls, it falls well short of Zamboni’s all-or-nothing finding. Furthermore, the increased CCSVI wasn’t seen only in MS patients but in patients with other neurological disorders, suggesting that it may not have a specific link to MS.

Florian Doepp, a researcher at the Department of Neurology at Charité Hospital in Berlin, published a study in 2010 looking at blood flow in 56 MS patients. Except for a single patient, blood flow for the group was perfectly normal. As Doepp decisively told the New York Times, “I conclude there is no evidence for CCSVI in multiple sclerosis and no evidence to support” the surgical procedure to treat it.

The notion that MS is caused by faulty blood flow and too much iron – and not primarily an immune disorder – is not only weak on evidence, it’s also weakened by evidence. Previous research has pointed to over 50 genes associated with M.S., and all of them are involved in the immune system. Also, Parkinson’s disease patients have abnormally high levels of iron in their brains, yet do not consequently develop MS.

The proper study would be to perform the angioplasty on some MS patients and a sham operation on others – in a double-blind study where neither the patients nor the researchers know who received the procedure and who received the sham. But these studies are hard to perform because they’re costly and unattractive for a condition like MS which is incurable, and for which present medications can significantly prolong life. However, two such studies are now being conducted, largely due to patient demands.

This past May the FDA issued a warning about CCSVI, saying “there is no reliable evidence from controlled clinical trials that this procedure is effective,” adding that “the criteria used to diagnose CCSVI has not been adequately established.” One person has died following the procedure, and the FDA has learned of “stroke, detachment and migration of the stents, damage to the treated vein, blood clots, cranial nerve damage and abdominal bleeding associated with the experimental procedure.”

What the science lacks in hard data, patients are making up for in an abundance of testimonials. The CCSVI procedure overwhelmingly makes them feel better, sleep better, move around better with more energy. Many patients even come back for repeat procedures when the effects of a previous one had seemed to wear off.

Is there something to Zamboni’s procedure or is this some kind of mass placebo effect? Michael Arata, a vascular surgeon who has performed the procedure on about 1,200 patients, thinks it works, but for CCSVI patients. Not those with MS. He acknowledges that changing a person’s blood flow will make them feel different regardless of whether or not it’s beneficial. As he told the New York Times, “If I would operate on people’s veins, I’m quite sure I’d have effects. Yet I know those effects will disappear and will not be really clear.”

Sounds like placebo to me, and probably also to attendees at a recent conference of European MS researchers and clinicians. Data from a study was presented at the conference that included 462 patients. The study showed that, while the CCSVI surgery lacked any benefits revealed by “objective measurements,” about half of the patients reported feeling better. One professional group at the meeting attributed the effects to “high expectations.”

More studies, like the ones being performed by the Multiple Sclerosis Society, are still needed to definitively assess any link between CCSVI and MS. Hopefully, at the end of it all, the patients will be proven right, that the surgery does work. It would be a shame to reach the alternate conclusion with so much time, work, and funding wasted on a procedure with lots of devotion but not much data.