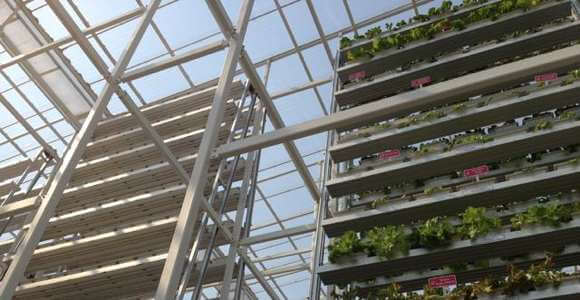 Short on arable land? One solution would be to plant…up. Singapore, a small country that imports most of its food, has now begun selling vegetables from its first vertical farm. And even while they’re more expensive the vegetables are already selling faster than they can be grown. If the farms prove sustainable – both technologically and economically – they could provide a much desired supplement to Singapore’s locally grown food and serve as a model for farming in other land-challenged areas.

The farm system, created by the company Sky Green and called A-Go-Gro, is a series of aluminum towers, up to nine meters high, with 38 tiers with troughs in which vegetables are grown. To ensure uniform sunlight the troughs are rotated via a hydraulic water-driven system that needs just 0.5 liters to rotate one of the 1.7 ton structures. With an emphasis on efficiency Sky Green made sure that the water was recycled, eventually being used to water the vegetables themselves. Just 60W of power – just enough for a lightbulb – is needed to operate one tower per day. The company that builds the system, Singapore-based Sky Green, claims that the artificial system is 5 to 10 times more productive than traditional farms.

Located at the southern tip of the Malay Peninsula, Singapore, about three times the size of Washington DC, has limited land for farming. Only about 7 percent of Singapore’s food is grown locally. The vertical farms are part of the country’s efforts to increase locally grown foods. And enthusiasm for the locally grown vegetables is high, as evidenced by the fact that the greens were already being sold out before they were commercially available.  And this occurred even though customers are paying about 10 to 20 cents more per vegetable. Choices are still pretty limited, however, as only three different types of vegetables were grown. But Sky Green is planning on expanding their current 120 towers to 300 in 2013, over which they expect production to increase from half a ton to two tons and increase the proportion of locally grown from 7 to 10 percent. The increased production would also drive prices down and attract even more customers.

But only when they ramp up production will we see if prices are driven down enough to be cost-effective. Sky Green will be in big trouble if current sales for the vertically-farmed greens are just a short-lived enthusiasm for the novel system or a fleeting willingness to pay higher prices for locally grown food. If it is shown to be cost-effective, the system could show the way for other places with limited farming space or even urban areas where a little green could go a long way. Cutting down on transportation and storage costs – not to mention providing vegetables with unparalleled freshness that people may be willing to pay a little bit extra for – could make vertical farms a staple in future farming.