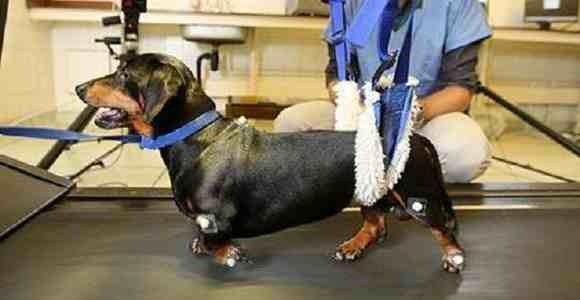 British researchers successfully restored the ability to walk in paralyzed dogs. Special cells taken from the dogs’ noses and transplanted to injured areas caused regrowth of neurons. Within six months the dogs amazingly regained used of their hind legs and were able to use a treadmill, some without a harness. The researchers hope the procedure might one day lead to a cure for humans with spinal cord injury.

Olfactory ensheathing cells (OECs) are part of the family of cells that surround and support neurons called glia. These cells coexist with the olfactory neurons that transmit odor signals from the nasal epithelium to the brain. For a long time it has been known that OECs promote the health and growth of olfactory neurons, and experiments have demonstrated that their health-promoting properties can work to repair spinal pathways in animals. In the current study, researchers at the University of Cambridge and the Medical Research Council’s Regenerative Medicine Centre in the UK sought to find out if OECs could be used to heal the damaged spinal cords of pet dogs.

At total of 34 dogs which had suffered spinal cord injury at least three months prior to the study were included. All of them had lost the use of their hind legs. For 23 of the dogs, OECs taken from their noses were grown up in a lab culture before being implanted into the injured portion of their spinal cords. The remaining 11 dogs received an inactive control fluid. Six months after implantation the group of dogs which had received the cells were now able to move their hind legs, and were even able to walk on a treadmill without a harness. In contrast, none of the dogs in the control group regained the use of their hind legs.

Watch Jasper in the following video. The difference between the before and the four months after is amazing.

It’s important to note that the dogs in the study suffered clinical injuries rather than injuries induced by researchers in the lab. This is important as spinal cord injury models are normally performed on animals that are similar in age, size, and genetic background and with injuries of the similar type and severity. Thus, it shouldn’t be surprising when a treatment that works on a group of lab animals doesn’t translate to the real world situation of human disability that varies wildly in these categories. In this sense, the current study is a better model for how the technique might be used to treat humans with spinal cord injury.

While the results are miraculous for the recovered dogs and their owners, Professor Robin Franklin, a regeneration biologist at the Wellcome Trust-MRC Stem Cell Institute and a co-author of the study, said he would expect some recovery were the treatment used on humans, but strongly cautioned against expecting full recovery. Professor Geoffrey Raisman, chair of Neural Regeneration at University College London and discoverer of olfactory ensheathing cells, echoed Franklin’s sentiments in a comment to the BBC: “This is not a cure for spinal cord injury in humans – that could still be a long way off. But this is the most encouraging advance for some years and is a significant step on the road towards it.”

There are approximately 270,000 people in the United States suffering from spinal cord injury, with 12,000 new cases occurring each year, nearly 40 per cent of which result from vehicle accidents. It’s a condition that is physically and emotionally devastating. The regeneration of spinal neurons has been a much sought after cure that has stubbornly eluded medicine. Let’s hope that the current study doesn’t offer false hope, but represents a real step, no matter how small, toward one day curing paralysis.