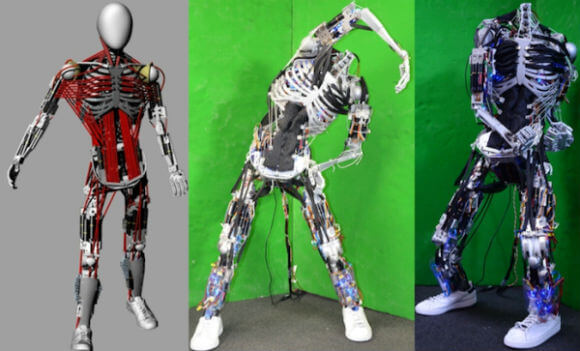 In the graphic novel The Watchmen, the physicist Jon Osterman is vaporized in an experiment and comes back as the god-like Doctor Manhattan after meticulously putting himself together again one organ system at a time. In a way, Japanese researchers are doing their own version of this through efforts to create human-like robots, though it’s requiring a much longer time frame to make a person out of metal and plastics.

In a recent effort to mimic the human musculoskeletal system, researchers at the University of Tokyo unveiled Kenshiro, a 50-kg robot that has the bones and muscles akin to a 12-year-old boy. The bones are made from aluminum, and the bot has individual ribs as well as floating knee cap (patella). Kenshiro was designed with many of the major muscle groups of the body, 160 in total with most of them being in the torso and legs. The muscles consist of pulley systems driven by single actuators to create planar muscles rather than point-to-point cables used previously.

Combined, these systems produce joint motion that is close to the rate that humans can move joints, thanks to a design that balances power, flexibility, and weight.

This latest bot is an extension of the Kojiro robot that was revealed in 2010, which had many of the joints found in humans but did not expressly mimic individual bones and muscles. Kenshiro is a refinement for sure as the new bones and muscle systems allow Kenshiro greater degrees of freedom: 64 in total, compared to 60 in Kojiro. However, this redesign has given Kenshiro a total power output  five times more than Kojiro.

But more importantly, bones and planar muscles are what humans are made of, so this achievement is significant toward the development of androids that are anatomically similar to us.

Check out the video on Kojiro to see the difference in form and function:

For all these cool developments, it’s important to realize  just how far robotics need to go to get to truly physical “human-like” state. For instance, last year Japanese researchers at AIST unveiled to the world a male version of their female Actroid-F android robot, which mimics the movements of people under observation. Their life-likeness is relative, as they only have 12 degrees of freedom in the face, making expressions rather limited. Additionally, the male version turned out to be the same as the female version, just with different hair and clothes.

It’s worth taking a look at the “ultra-realistic” bots, as Diginfo dubbed them, to get a sense of how far things still need to progress to get to a version that we could interact with and not have the creepy Uncanny Valley experience noted by many:

In the years to come, news of robotics development will only increase as we watch researchers put humans together much like Doctor Manhattan. Whether individual bones and muscles will work best or some other design will prove superior will only be resolved once each design can be tested. In the end, the greatest challenge may not be creating individual robotics systems or artificial intelligence, but packing all of these components into a single robot.

One thing is clear: when it comes to androids, our best gauge of “human-like” may be how freaked out we are when we discover that the person we are speaking to is a robot.