Every Earth Day, we’re reminded that though common petroleum-based plastics are durable and cheap, many aren’t biodegradable or recycled. This accounts for the 72 million tons of containers and packaging in the U.S. municipal solid waste stream (as of 2009) that will be around for a long time. The solution to the plastics problem is straightforward and fairly well known: we need to identify degradable bioplastics as replacements and adopt their use as soon as possible. Bioplastics are materials derived from plant sources and usually biodegrade on relatively short times scales.

Though a handful of companies are producing bioplastics that are seeing commercial use, such as in grocery bags, the materials just haven’t gone mainstream…yet.

In the first week of November, the 7th Annual European Bioplastics Conference aptly titled “Bioplastics: From Niche To Mainstream” was held in Berlin to deal with this very issue by assessing trends, innovations, and applications for bioplastics. Additionally, the conference announced the winners of the 2012 Global Bioplastics Award, the Takata Corp and German-based Institute of Bioplastics and Biocomposites. Curiously, both companies were honored for their work in an industry seen as the golden path to mass adoption: the automotive industry. Takata has been working on using bioplastics in manufacturing steering wheels and airbags while the German Institute has experimented with composite materials of epoxy resin and flax fibers in car body parts, like tailgates.

A video highlighting the conference was recently made available:

Other companies are also making some significant moves to get bioplastics into cars.

Mitsubishi Chemical and French auto parts manufacturer Faurecia recently announced a partnership to develop bio-based plastics for use in car interiors. The plan includes a joint venture with a polybutylene succinate (PBS) production facility opening in Thailand with a goal to produce a range of automobile interior components beginning in 2015. Ultimately, the process will be refined to produce bioplastics completely derived from natural resources, or as close to complete as possible.

Even though the world is struggling through economic recovery, amazingly close to 60 million passenger vehicles were manufactured globally each year for the past three years, with 2012 breaking a record for the most produced, according to the International Organization of Motor Vehicle Manufacturers. So if automobile manufacturers can be convinced that bioplastic car parts are better — whether because they are more durable, more degradable, cheaper, and/or highly desired by a more environmental-conscious public — then adoption could be swift and broadly implemented.

In other words, bioplastics are poised to go mainstream just when we need them.

Take the situation that the love-hate relationship with plastics has created in the U.S. over the last 50 years. Americans do a poor job at recycling, with only about 6 percent of manufactured plastics being recycled in 2005. Furthermore, manufacturing of regular plastics siphons off 10 percent of U.S. petroleum available for consumption, which is like attaching a ball-and-chain to a nation seeking to overcome its foreign oil dependency and energy problems. And there’s the growing awareness of how these plastics break down into small pieces and enter the food chain, make animals sick, and ultimately end up in some form or the other as part of our meals.

The problem goes global when we realize that many of the petroleum-based plastics float, so when trash enters river systems, it will find its way to the oceans where it has the potential to aggregate into structures like the fabled Great Pacific Garbage Patch. These floating trash heaps are likely not as large as reported, but certainly will only grow in size in the coming years.

Bioplastics have the potential to ease the pressure on landfills and surrounding ecosystems, degrade in a reasonable time frame, and reduce the siphoning of petroleum for plastics manufacturing. It appears that the best hope for turning the tide rests on getting car parts made our of bio-based materials. 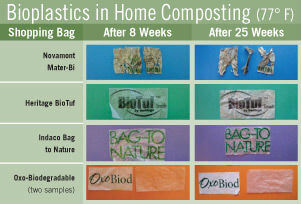 But significant questions remain about whether current bioplastics are able to live up to the hype of being truly biodegradable. A few years ago, Mother Earth News commissioned a lab to test out a number of bioplastic bags that were commercially available to assess their degradation. The results showed that under typical compost conditions at 77 degrees, most of the materials degraded to a degree but none broke down completely even after 25 weeks.

Clearly, work needs to be done to ensure that “biodegradable” isn’t just marketing hype, but these challenges can be overcome using the lessons learned from a half century of plastics manufacturing.

Considering the other innovations happening in and surrounding the automobile industry, it seems like the perfect time for bioplastics to gain widespread entry. For example, cars are continuously getting smarter with Bluetooth use, touch screens built-in, and the ability to plug in smartphones. Also, electric and alternative energy vehicles are gaining as technology improves and more alternative fueling stations are opening (not to mention how the premium electric Tesla Model S won “Car of the Year” by Automotive Magazine). Then there’s Google’s continuing efforts at creating self-driving vehicles that have already received the green light to operate in Nevada and California. Finally, a recent report about The Netherlands upgrading their road infrastructure to include glow-in-the-dark paints and battery charging electric-only lanes by 2015 means that their is still plenty of room for innovation in the transportation sector.

Taken altogether, automobiles are experiencing a new era of innovation with changes coming quicker than ever. Those in the bioplastics industry are wise to capitalize on this surge to get bio-based materials vaulted into mainstream manufacturing.

Hopefully in a few years from now, we’ll be able to look back and see that this was the moment that turned the tide for bioplastics and started the ball rolling to reducing the massive amount of waste plastics hanging around until someone figures out how to get rid of them.