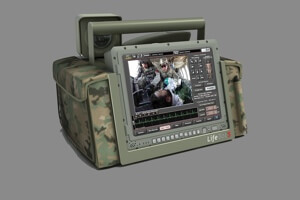 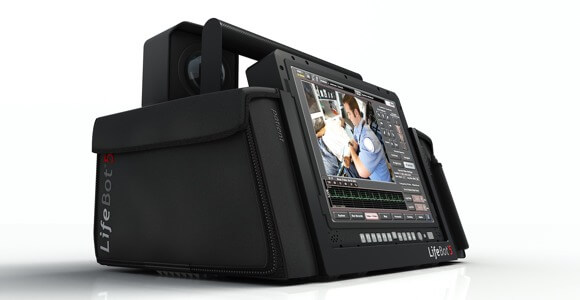 In emergency care every second counts. LifeBot, the telemedicine unit that connects ambulances to hospitals with patient data and live video feeds, has just got even more mobile. No longer confined to the ambulance, the new version, LifeBot 5, is a lightweight portable unit that can go anywhere critical care is needed.

LifeBot originally served to relay realtime data between ambulance EMTs and emergency physicians at the hospital. EMTs could receive remote instructions and the hospital could get a head start on preparations for the inbound patient. Two cameras captured both the LifeBot operator and the patient and enabled webcam communication. LifeBot 5 adds to the original system to deliver a more complete monitoring system.

LifeBot’s Interceptor is a medical electronics module that enables full physiological monitoring of the patient. In addition to voice and video transmission, the Interceptor has leads for ECG, monitors heart rate and blood pressure, blood oxygen levels and body temperature. And to complement the movement toward medical record digitization, LifeBot 5 is equipped with Electronic Patient Call Report (ePCR), a web browser interface that provides access to Electronic Health Record systems. Its communication system, Disaster Relief and Emergency Medical Services, or DREAMS, has been field tested aboard five ambulances in Liberty County Texas for over six years now.

And the best part is that the new unit weighs just 15 pounds and has been ruggedized so it can be taken anywhere.

In the future LifeBot plans on adding a defibrillator to its arsenal of medical tools. Its modular build allows it to be adapted as new technologies emerge, and LifeBot CEO Roger Lee Heath sees the device as a continual work in progress: “These are just the first steps towards a portable system design that will rapidly evolve,” he said in a newsletter. “The LifeBot 5 system is already setting new standards for advancing remote care in the industry.”

LifeBot was originally developed under a $14 million initiative by the Department of Defense’s Telemedicine and Technology Research Center and the US Army Medical Research and Material Command. Each LifeBot 5 unit costs around $20,000.

Often discussions about the future of telemedicine deal with telepresence robots like iRobot’s AVA that allow doctors to see their patients without actually going to see them. But devices like LifeBot are already making an impact in the field. And now that it’s portable it can be taken to areas where even ambulances can’t go, such as a disaster site or the battlefield where people in need of critical care can still receive expert advice from an emergency physician.