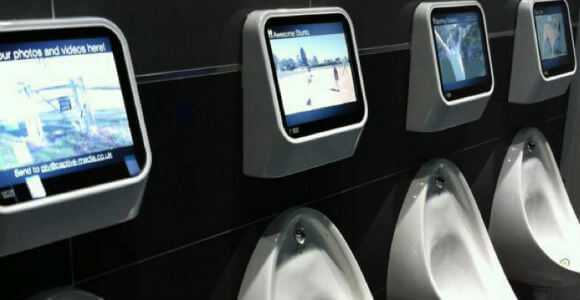 Thanks to modern mobile devices, we can play video games almost anywhere and anytime, but the key word is almost. There are notable exceptions where people can get a break from screen time. Although a significant number of mobile phone users admit to using their phones while in the bathroom (explaining how some phones end up in the toilet), urinals in a men’s restroom have been one place where video games just haven’t been practical…until now.

London-based Captive Media has started to install video game consoles above urinals in 18 locations throughout Europe. The system works by using a display appropriately angled for easy viewing with an infrared sensor detecting the directional flow of a user’s urine stream and treats it as input.

The urinal video game console delivers ads and promotes engagement with interactive games (five currently including a racing game and trivia) all within the approximate 1-minute window of time it takes for a man to empty his bladder. And apparently, it helps men keep their aim too, which could make restrooms cleaner. Although the pee-controlled games work just with urinals, the company offers related touch-based systems for women’s restrooms as well.

A number of these systems have been installed across the UK with select locations in France, Ireland, Italy, and Spain testing them out with customers. But the company has plans to bring its technology to other European countries including Austria, Denmark, and The Netherlands (Wired states that the US is next). While putting the systems in at drinking establishments is a no-brainer, the consoles have also been installed at hotels, shopping malls, and workplaces.

Though some may scoff at the idea, Captive Media’s approach is taking restroom advertisements to the next level by already delivering a million game impressions in less than a year of operation. Recently, UK angel investors jumped onboard the venture to the tune of $700k in funding.

For an overview of the technology and how consumers are responding to it, check out the company’s promo:

If this sounds like a joke, you might be surprised to learn that this isn’t the first gaming system to use a pee stream as a controller. Last year, Sega launched its own urinal video game system called the Toylet in Tokyo. At a price of $1750, the Toylet comes with four mini games (costing $125 each) and a USB port to download high scores onto a flash drive.

So what value does a urinal console offer a business owner? Probably not one major benefit, but a bunch of smaller ones that can ad up.

First, there’s advertising. Urinals and bathrooms in general suffer from the same problem as being on an airplane: you’re often left to stare directly in front of you. Instead of a blank wall, the system can display static ads continuously as patrons walk around the restroom, and when a patron steps up, a short ad can be displayed before the games begin. This could be a big draw, not only for larger corporate advertisers, such as Heineken, Corona, and Pepsi who has partnered with Captive, but also local businesses like breweries and vineyards who want to make users aware of their offerings.

For the average window of 55 seconds that makes up the attention span of urinal users, Captive claims a 45 to 75 percent recall of ads, higher than many other forms of advertising media.

The novelty of the consoles also make for a memorable experience, and that’s important for promoting repeat customers. It’ll probably be a long time before bathroom displays are so common that people learn to ignore them, so in the short- to medium-term, the novelty factor can be a draw…until they become like video poker machines at the bar.

Furthermore, to play the games you need to drink, and to drink means to spend money. Case studies by Captive show varying increases in sales as a result of the system, such as a 22 percent sales bump for a special at a Cambridge bar. These increases are likely a combination of advertising, the desire to compete, and again the novelty. Still, this is somewhat of an unexplored space, so as the company improves the system, advertising approach, and games offered, impact on sales could be further optimized and increased.

Beyond the bar scene, this system just seems to be begging to become part of an airport upgrade somewhere. The high throughput of an airport bathroom means lots of ad impressions, and frequent fliers could also compete for top scores.

The urinal video game system is just one of the many technologies that aims to take advantage of the blurring line between the physical and virtual worlds. We all know that smartphone and tablet adoption is making huge gains, but other display tech is coming that will demand our attention. Examples include interactive billboards that respond to your text messages, Coke machines that distribute free drinks if you can dance well, and kiosk robots that advertise products and accept payments. And of course there’s the ongoing promise of flexible OLED displays that could be incorporated into clothing, turning everything you wear into a potential console for ads and gaming.

Captive Media has found one of the last pieces of visual real estate to bring an interactive experience. So if gaming isn’t your thing, you may have to take solace in a bathroom stall to find a game-free zone (at least for now).