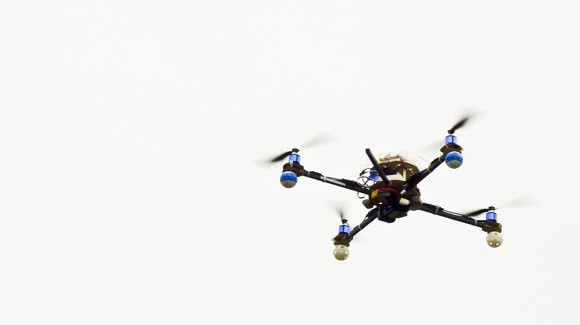 It’s a bird…it’s a plane…it’s…it’s Big Brother hovering over your head.

As drone technologies continue to improve and as the official use of drones continues to extend its reach some are sounding the alarm that the birds’-eye view, high-definition surveillance poses an increasing threat to personal privacy. And rather than wait for the Federal Aviation Administration (FAA) to take action, Berkeley, California is attempting to take the lead and proclaim the sky above their city a ‘No Drone Zone.’

The resolution was put forth at a December 18th Berkeley City Council meeting by the city’s Peace and Justice Commission who declared that “drones will not be purchased, leased, borrowed, tested or otherwise used by any agency of the City of Berkeley over the City of Berkeley, including drones in transit.” Anyone in violation would face fines up to $10,000 and jail time up to a year. The resolution makes an exception for drones flown by hobbyists, but only as long as they are flown in designated areas away from residential areas and are not equipped with cameras or audio surveillance devices. The resolution remains only a proposal at the moment, but it includes a charge to the City Attorney to begin the necessary legal action to turn the declaration into city legislation.

So much for taking the Parrot AR.Drone 2.0 with its awesome 1280×720 HD resolution for a joy flight over the Berkeley skies.

The proposed restriction is in large part a response to efforts by the Alameda County sheriff’s office to acquire surveillance drones. Citizens yielding “No Drone” signs showed up at the meeting. City council members, however, rejected the ordinance and said the city doesn’t actually have jurisdiction over its own airspace. As one city council member, Jesse Arreguin, told Forbes, he recognizes the need to regulate the proliferation of drones, but added that “there could be appropriate uses of drones in cases of natural disasters and locating missing persons. To say we shouldn’t allow any drones at all is unreasonable and doesn’t recognize some very limited but beneficial uses.”

The city council seems to agree. They’re passing the resolution on to several city commissions for revisions, suggesting that use during natural disasters and finding missing persons be exempt from restrictions on drones.

The ShadowHawk is a beast of a copter drone – 7-feet long and weighing 50 lbs – that tracks criminals from above with CCD video, infrared and thermal cameras and packs a taser, a grenade launcher or – for military purposes – a laser sighted shotgun. The ShadowHawk is already being used at the Montgomery County Sheriff’s Office in Texas. It was also selected by leaders in global oil and gas companies to help police the shores off of Africa to keep their ships safe from pirates.

And Americans can most likely expect to hear the buzzing sound of aerial security themselves. Already fifty different organizations around the US have received approval from the Federal Aviation Administration (FAA) to use aerial drones for surveillance. Seattle became among the approved in October. Just as in Berkeley, the decision was met with a crowd of protesters.

Despite the very understandable hesitation seen in some communities, the use of drones around the US for domestic surveillance is expected to increase. Last year the Obama administration put in for $5 billion to fund its drone program. And Congress just recently ordered the FAA to select six locations around the US to conduct safety tests on drones of all sizes.

The growing emphasis for drone use on the domestic front doesn’t mean the US government is slowing down their military drone program. Right now the US military has about 8,000 drones in operation, making up around one-third of their total military aircraft and they plan on spending $36.9 billion over the next eight years to expand the drone fleet by 35 percent.

Drones are already a controversial topic for many. And as they make their way from far flung lands of war to – literally – our own backyards, federal and state courts should brace for the dogfight undoubtedly on its way to meet them.