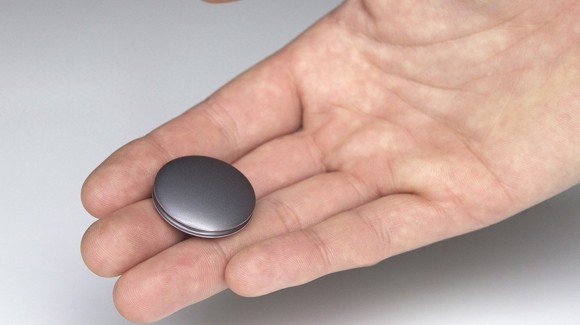 Finding it difficult to stick to that New Year’s resolution to exercise more? Maybe the problem is you’re lack of quantitative feedback on just how well you really are doing. A new activity tracker that can be worn just about anywhere might just be the answer to confirm – or, oops, reject – just how well you’re actually doing.

Misfit Shine is a wearable activity tracking device about the size of a Nilla Wafer (or, if you’re too young, about two stacked quarters). Its smooth, elegant shell is carved from a block aircraft-grade aluminum so it can take a whacking and keep on tracking while you jog, bike, or, because it’s waterproof, swim. There are no buttons to push. You just tap the surface

The aluminum casing makes wireless communication difficult. The company developed a new Wi-Fi technology to get around this. Placing Shine on a smartphone allows it to communicate to an app that reads and stores the data. The app, which runs on iOS5+ and Android 4.0+, can be used to set goals and track progress toward reaching them. And you won’t even have to break stride to check your progress. Tap the Shine during exercise and a series of orange lights indicate how close you are to reaching your goal A battery lasting six months supplies power to Shine. The small device can be worn on belts, shirts, shoes, just about anywhere. Leather bands are available so that Shine can be worn like a watch. The company is also planning on making necklace attachments as well. An activity tracker this sleek could very well pass for a necklace – c’mon, we’ve all seen worse.

The Shine is currently nearing the end of an exceedingly successful Indiegogo campaign. In one of the website’s biggest, Shine reached its goal of raising $100,000 in under ten hours. At the time of this writing, the campaign has raised $650,119.

The Shines come in two flavors: the silver model costs $79 and the black one $129. Working prototypes have already been completed and Misfit Wearables is now planning on moving its resources toward production. The company expects to launch Shine in the next few months.

There are a lot of activity trackers out there. Here’s DailyTekk’s top ten. But one thing that Shine has that others don’t is the backing of former Apple CEO John Scully. And while we don’t know which will dominate the field, Shine’s amazing Indigogo jumpstart is easy to track.