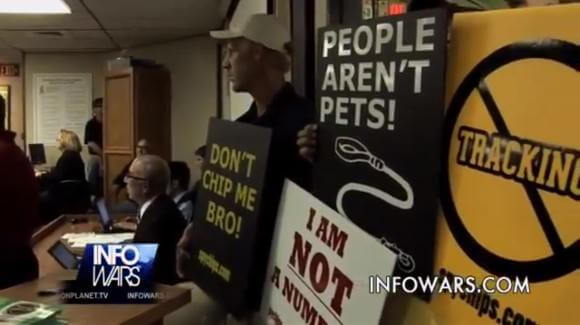 Andrea Hernandez is a student at John Jay School, a magnet school in Texas whose students were recently required to begin wearing Smart ID badges with radio-frequency identification (RFID) locator chips in them. She is also a member of an evangelical Christian family who view the badges as an affront to their religion. Which is why, when school officials told Andrea she would have to wear the badges like all the other students or risk transfer, the Hernandez family took the school to court. They sought an injunction against the school system. Unfortunately for the family, however, US District Judge Orlando Garcia has now rejected the request.

One might logically guess that refusals to be tracked with an RFID chip would be based on issues of privacy rather than religion. But the Hernandez family, represented by Virginia-based Rutherford group, cited scripture in their lawsuit the Huffington Post reports, claiming “acceptance of a certain code…from a secular ruling authority” is a form of idolatry. The family stated that they consider wearing an ID badge equivalent to “submission of a false god.” Hernandez’s father likened the badge to the “mark of the beast.”

There are two strange things about this case. First, Hernandez wore a badge before the school decided to put a chip in it. Second, the school offered to remove the chip from her badge, but she would have to continue, as she did before, to wear the badge. The problem is, now that all the other kids are wearing badges with chips in them, the Hernandez family feels as though even wearing a chip-less badge communicates support for the program.

And the drama will continue as the Rutherford group said they plan to appeal the court decision.

RFID chips have been used to track a multitude of items. Library books, department store products, and just about anything that is part of a major supply chain are tracked to streamline the chain and save money. In vitro fertilization clinics have used them to avoid extremely awkward moments were they to mix up which sperm goes with which egg. Animals are routinely tagged too. But the touchy part comes when you want to start tagging people. Actually, some have been tagged for a while. Hospitals will often place RFID chips on patients lest they wander off or a hurried doctor misplaces them.

But school children? That’s something a lot of people are finding hard to swallow.

One might think that safety concerns were at the core of tracking students. But the $261,000 that the Northside school district spent on the locator chips is a well spent financial investment. Funding for Texas schools is based on student attendance. If the bell rings and students are late getting to the classroom but the chip indicates that they’re on campus, they can be marked as present. At $30 per student that the schools receive, the San Antonio school district stands to gain an estimated $1.7 million in state funds.

Probably using similar reasoning, a Houston school district has already begun to adopt them, as well as a school in California – with the ACLU fighting the moves every step of the way. Unlike the Hernandez case, resistance in Houston and California were motivated by a desire to protect the children’s (and the parents?) privacy. We’ll probably see more of these kinds of battles across the country as more school boards will no doubt decide to test drive the RFID chips in their own school districts. But it goes to show you never can tell what kinds of issues will come to light with the emergence of a new technology, or a new use for an old one.