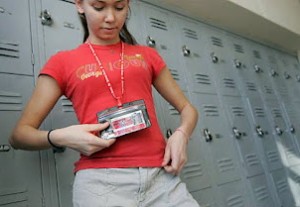 The eyes of Texas are upon you—if you happen to be a student from San Antonio that is. John Jay High School and Anson Jones Middle School in the Northside Independent School District are requiring students wear RFID badges to more efficiently track attendance, and the decision has some students and parents in a tizzy.

Tag teens like cattle will you? We’ll be having none of that, thank you.
RFID tracking of humans has touched a nerve because it’s part of a larger, perfectly reasonable debate. The line between private and public information is blurring, and the ability, if not yet the full execution, to track our every move is already in place.

The question, rightfully, on many a mind is, “How will we control this power?”

Radio Frequency Identification (RFID) devices date back to WWII and have been increasingly used commercially since the seventies. The technology is perhaps most successful when streamlining the supply chain. Other largely non-controversial uses include tracking livestock and library books or automatically paying tolls and public transportation fares—even tracking chips in casinos.

RFID tracking of things has long shown its value. But is RFID tracking of humans tantamount to Big Brother? Maybe. But not yet, and certainly not in the case of these Texas schools. If RFID badges for students are a gross violation of privacy, then said violations have been occurring as long as we’ve had schools.

Today, most teachers still call roll verbally. If a student doesn’t answer, the teacher knows they aren’t in class. With RFID badges, school officials come to possess the same information, only more efficiently.

The badges contain no sensitive personal data—each student is represented by a random serial number. Further, the badges only work on campus because that’s where the RFID readers are. They are non-invasive and can be easily removed. It’s a little ironic the Facebook generation is protesting—students already reveal exponentially more about themselves on social media websites. And if they wait but five or ten years many will find themselves using RFID badges to access their workplace.

Although this iteration of RFID student badges may be mostly innocent, it might also be somewhat ineffective.

What if a student forgets their badge but still attends class? Or what’s to stop students from toting two badges to school, covering while their friend skips? Or walking a badge in, leaving it in a locker, and walking back out?

Therein lies the slippery slope—do we solve these issues by embedding chips under the skin? (VeriChip is FDA approved for human use.) All in the name of student attendance? Aldous Huxley said, “Hell isn’t merely paved with good intentions; it’s walled and roofed with them. Yes, and furnished too.”

If RFID badges are frightening, what about that sleek rectangle of glass and metal in your pocket right now? Many people voluntarily carry smart phones because they are darn handy. And yet smart phones are a far more powerful tracking technology than any RFID device. 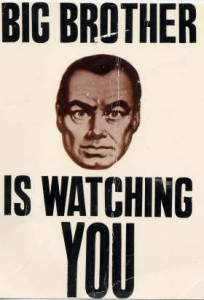 If you opt in (and most do), your smart phone broadcasts location, speed, and travel routes to data centers. Smart phones have cameras, microphones, and GPS. They are connected to the internet and are as vulnerable to hackers or government snoops as any PC. What more could a would-be spy want?

And it isn’t just physical tracking. Many folks use their phone to bank online or cash checks. Soon smart phones may act like credit cards. We browse, shop, read email, make phone calls. Our virtual presence is already closely tracked and quantified.

Personal information is the price we pay for convenience.

So far, the toll isn’t terribly steep. Your cell phone may help track traffic real time, but first your trip’s endpoints are deleted and your identity is stripped from the data packet. Businesses purchase access to your online habits, but mostly for innocuous (if annoying) targeted advertising campaigns.

Internet firms are very conscious of privacy issues. They know if they don’t respect your info, they’ll face mass revolt—and that would be the end of the company.

But what happens if your information falls into the wrong hands? Once the system is up and running, the cunning and powerful can easily pervert its functioning.

Have you heard of the creepy hacker using PC cameras to spy on their owners? Or what about the NSA’s 25,000 square feet of server space capable of  recording a yottabyte of information—500 quintillion pages of text? Or the recent court case upholding warrantless seizure of cell phone location data?

No one suggests technology’s benefits are risk free. Wernher Von Braun gave us the V2 and the Saturn V—destruction and discovery. Will Google, Apple, Facebook, and Twitter’s legacies be equally ambivalent? Mobile phones and social media gave protestors in the Middle East the means to organize—and their oppressors the means to find and torture them.

As technology advances, tracking what every person is doing at any moment becomes increasingly easy and cheap to achieve. It will be an interesting road to travel in coming years, to see just how far we go. Upcoming generations are already somewhat desensitized to this radical openness. And chances are most of us will tolerate a shrinking private sphere as we find the benefits outweigh the costs.

See a video of the RFID debate in Texas here: