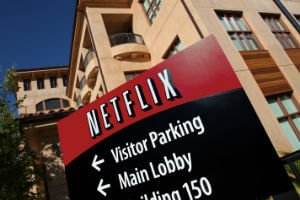 The video streaming service Netflix is advancing the line in the battle for the future of television. CEO Reed Hastings recently indicated in a letter to stockholders to mark February 1, 2013 as a “defining moment in the development of Internet TV.” Why? Because that is the day that its much hyped original program House of Cards was not only released, but the entire 13 episodes were made available all at once.

On the surface, this may not seem like that big of a deal. After all, many of the TV shows currently on the service’s Instant Watch have entire seasons available now for viewing. But the difference is these are not new shows — they’ve already been run previously one episode per week on a basic or cable channel. For Netflix to launch a brand new show with all the episodes at once is a big shift in the way that programming is released and assumes a lot about the way people consume their shows.

Just take a gander at what Hastings suggests in his letter:

Imagine if books were always released one chapter per week, and were only briefly available to read at 8pm on Thursday. And then someone flipped a switch, suddenly allowing people to enjoy an entire book, all at their own pace. That is the change we are bringing about. That is the future of television. That is Internet TV.

You see, Netflix knows too well about a much tweeted trend of consuming an entire season or multiple seasons of a show in a marathon, hypnotic session (Breaking Bad, anyone?). Now, the company is not only acting on what it knows about viewing habits, it’s staking a claim that its the game changer for the future of TV.

The company is putting its money and reputation where its mouth is by going big, in the Hollywood sense of the term.

In particular, House of Cards is the real deal. At a cost of $50 million, the show has some major celebrity muscle behind it with Kevin Spacey and Robin Wright starring and David Fincher as director. While it isn’t the first original series that Netflix has been behind (that would be the fairly well received  Lilyhammer), it marks a stronger move into the big-names-in-an-original-series space that HBO has dominated.

The show also kicks off a trifecta of original programming to roll out this spring. In April, the gothic Hemlock Grove, based on the novel of the same name, will aim to capitalize on the growing viewing segment interested in horror thrillers. Finally, the much anticipated fourth season of the award winning cult classic Arrested Development, sure to be one of the biggest draws in television this year. After being cancelled by Fox in 2006, the show continued to grow an audience through online streaming. In May, 14 new episodes featuring the entire ensemble cast will be released all at once.

Though Netflix experienced a few bumps in 2011, most notably a failed effort to split its DVD service from online streaming and losing studio contracts, 2012 was a year of significant recovery. After expanding into 40 countries, 10 million customers were added globally, bringing the total number of streaming members to 33 million. In addition to a growing membership, Netflix signed an exclusive streaming deal with Walt Disney to bring films from the Disney Animation Studios, Pixar, and Marvel into its fold.

But another reason that the company’s strategy is important to monitor is the way that it is changing how the Internet is used and the inevitable strain it is putting on the web’s infrastructure.

Consider this: a 2012 release from Sandvine titled “Global Internet Phenomena Report” revealed that at peak times, one-third of Internet bandwidth in the US is currently used to stream videos from Netflix alone, while YouTube eats up close to 15%. Other streaming services such as Amazon’s Video on Demand (1.75%), Hulu (1.38%), and HBO Go (0.52%) trail much further behind, but each of these services is also growing and marketing aggressively. Although iTunes consumption was close to 4%, it is primarily used for downloading music and videos, yet Apple seems to be ever toying with the possibility of expanding its service into streaming.

In light of these numbers, traditional Internet providers may have to seriously reconsider throttling and tiered data plans. Otherwise, they may very well see a new player move into the market to satisfy the veracity of Netflix customers viewing habits. Perhaps that is why there is so much excitement surrounding Google’s move into building network infrastructures with Google Fiber, reported to be delivering speeds up to 1 gigabit.

As online video consumption grows worldwide, we can expect all eyes to continue to remain on Netflix, and if its original programming delivers on the hype, expect to see even more new shows delivered in one giant heap of viewing goodness.