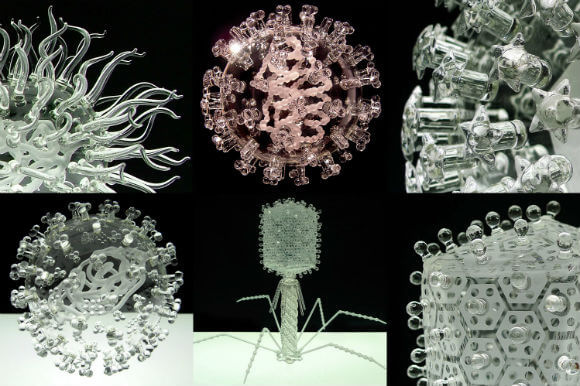 Phrases like “viral art” or “infectious sculpture” only begin to provide an impression of what British artist Luke Jerram has created: human-scale glass sculptures of viruses, bacteria, and other organisms from the microbiological world. The sculptures aren’t just creative interpretations at approximately a million times larger scale, but derive from scientific images, models, and insights from the people who study them for a living.

Rendered in glass, the sculptures emphasize the structural aspects of these microbiological wonders. The allure to these designs may be in their simplicity and regularity, especially in the viruses.

Since he began collaborating with scientists and glass blowers to create sculptures in 2004, his work has shown up on the cover of Nature and been profiled in The Lancet, The New York Times, and other major media outlets. Recently, the artist announced that the Metropolitan Museum Of Art in New York has acquired some of his work for its permanent collection as well, adding to the long list of other museums where his work has been presented.

“People are automatically attracted to things of beauty. But when they realize actually what they are, there’s that element of…repulsion.” Luke said that the general response from people is positive, though some “feel that they might get infected if they touch them.”

The BBC did a short piece on Luke back in 2011 that showcased the artist and his work:

When he first started, he made a hand-sized glass sculpture of HIV so that people could “contemplate the global issues of what that virus is doing to the world.” But his interest shifted into how perception of viruses is affected by brightly colored illustrations and other images that are commonly shown in media. Anyone who has seen a textbook version of a virus expects it to be colored, yet viruses have no color because they are smaller than the wavelength of light. This is partly the reason Luke became interested in this in the first place as he is color blind.

But through the years, his collection has evolved to become a window into all that is going on at that microscopic level. Viewed as works of art, the simplicity and order of these phenomena can be better appreciated among the public, helping to alleviate some of the demonization that people associate with the culprits behind some of the world’s deadliest diseases.

In an interview with Wellcome in 2009, he said “The series is a reflection of my interest in how images of phenomena are represented and presented to the public…with 3D sculptures, there’s also a tangibility you can’t get from flat pictures.” He went on to explain how their is a gap between what scientists know about viruses on the chemical level and what they can observe with electron microscopy, adding “there’s sometimes a gap in understanding and (even for virologists) a certain amount of guesswork in what a virus looks like.”

His interest in his work is also personal: he was diagnosed with swine flu at the beginning of the outbreak.

The following are images and video that Luke has produced over the years: 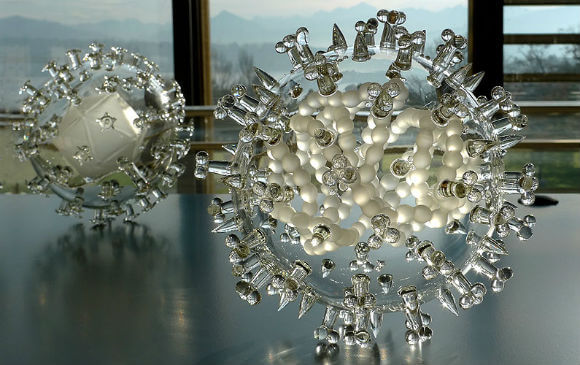 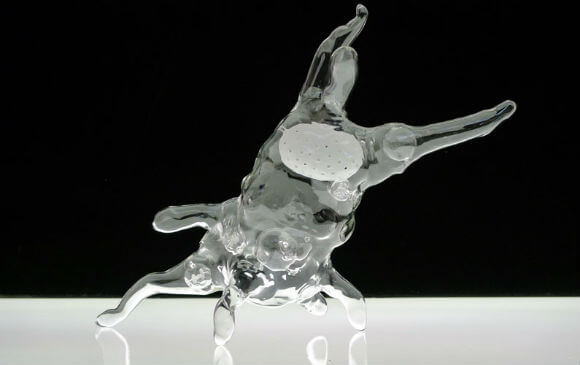 If you are interested in the glassblowing process of how these art works are created, watch this awesome video that shows how the HIV sculpture was created:

Finally, to see more of the incredible work that Luke has produced over the years, check out his full gallery at his website here.