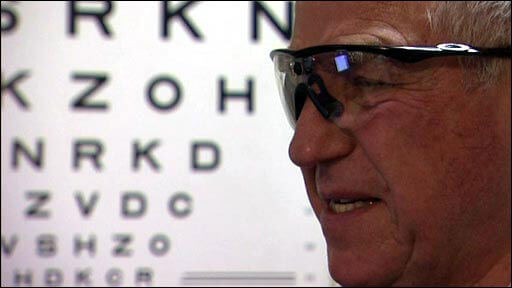 The Food and Drug Administration (FDA) has approved the Argus II artificial retina to restore partial sight to patients who are blind. The device, sometimes dubbed a bionic eye, was designed at the Lawrence Livermore National Laboratory to help people who suffer from retinitis pigmentosa, a hereditary degenerative disease that causes degradation of retinal function. Although the device does not restore full sight to the visually challenged, those with the disease are able to now have limited, low-resolution visual pereption.

With the green light from the FDA, people suffering from late stage retinitis pigmentosa are now eligible to use the device, which is approximately a few thousand in the US with the severest form of the disease.

As previously reported, the Argus is a three-part system . A sunglasses-like visor contains a video camera that records the wearer’s field of vision. A belt-worn processor converts the video into electrical signals that are wirelessly transmitted to the implant embedded within functional retinal tissue of the eye. The implant contains an array of 20 electrodes able to allow light to be detected. With the performance being highly dependent on the video processing unit, improvements in the software and hardware are ongoing and will likely translate into even greater gains in vision beyond resolving edges of buildings or general shapes of objects.

Though the cost of the device in the US has not been announced, it retails for $100,000 in Europe where it received the CE Mark in 2011. Currently, only about 50 patients in the US and Europe have the Argus installed, but some US doctors are already trained for the surgery in preparation for its approval.

The New York Times produced a video about the announcement showing Barbara Campbell, who has been blind for two decades, using the Argus II. She was a participant in the clinical trial run by Second Sight, who markets the device in Europe. Walking down a busy street, she explains, “I can detect the trees on the side here…I don’t see any colors at all, just black and white. It usually helps most with good contrast.” She even noted that her vision has improved over time as she has become acclimated to the device.

You can see her explain how the device has improved her life below:

Though the Argus II has been in development for years, scientists at Lawrence Livermore have been busy working on the Argus III, a system which promises even greater resolution with at least 200 electrodes. Ultimately, the goal will be to get up to 1,000 electrodes as that would enable facial recognition. Furthermore, the ability to help people suffering from other types of vision loss, such as the common age-related macular degeneration, are being pursued.

The Argus II is the first of its kind to receive FDA approval, marking a new era of medical visual prosthetics and the eventual adoption of elective cybernetics. What begins as sensory restoration due to disease will undoubtedly evolve into augmentation as the technology matures. In fact, this is exactly what Neil Harbisson has experienced over the last few years, prompting him to start the Cyborg Foundation to legally recognize those with augmentation.

Advances in bionic eyes hold the promise of progressing beyond the physical limitations of biology and ensuring the vital sense of vision can be granted throughout someone’s lifetime. Hopefully, the Argus II is merely the first in a coming wave of devices that can bring vision to those who have had to live without.
[image: BBC]