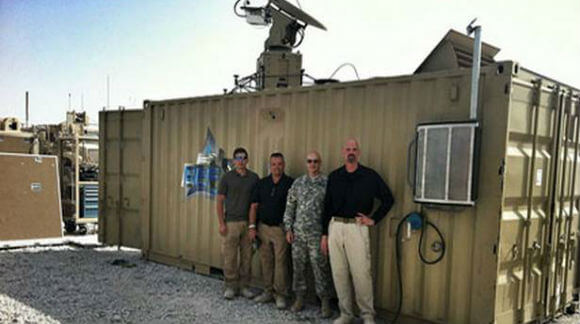 Throughout history, war and innovation have gone hand in hand, whether it’s breakthroughs out of heavily funded R&D programs or makeshift contraptions thrown together with spare parts. Soldiers are trained to use the technology on hand to get the job done, one way or the other.

But how would military operations change if soldiers on the battlefield could have the best of both worlds: access to expert engineers able to fabricate custom-designed fixes right on-the-spot and in very little time?

The ability to rapidly evolve solutions from conception to implementation has become a reality with the Expeditionary Lab Mobile (ELM). The 20-foot container comes equipped with 3D printers, computer-assisted milling machines, and laser, plasma, and water cutters, along with common tools like saws and welding gear. Parts can be made of plastic, steel, and aluminum.

With a generator, heating and cooling systems, and satellite communications all manned by two specially trained engineers, the 10-ton ELM is effectively a digital fabrication workshop in a box.

When an ELM is on site, soldiers can dialogue with engineers about solutions to a particular problem and discuss potential designs. Through this collaborative process, the engineers can fabricate the parts so that soldiers can immediately test the designs and provide valuable feedback.

One example of how the ELM proved useful involved a flashlight with a raised power button that could accidentally be turned on, which could give away a position or just cause the batteries to wear down. The problem was fixed by fabricating a clip-on guard over the end of the flashlight, avoiding what would have been a lengthy procedure to decommission and replace the flashlight.

Part of the Rapid Equipping Force (REF) of the U.S. Army, two of the $2.8M labs have already been deployed via Chinook helicopters to undisclosed locations in Afghanistan, and a third is scheduled to be available for use this June.

Col. Peter Newell, the director of the REF, oversaw the conversion of stationary prototyping labs located in Afghanistan into the mobile versions using shipping containers. He described the need for the ELMs, as reported by Military News last August: “The soldiers out there, they know how to do stuff; they know how to fix stuff and they know what they need to be able to do, but what they don’t have is the technical expertise in many cases to do it themselves.”

To further appreciate how an on-site lab could benefit soldiers in the field, check out the following video:

The labs were produced as part of a three-year $9.7 million contract with Exponent Inc., a large engineering consulting firm.

The fabricated parts produced in the lab are definitely meant for short-term use, but the potential for them to serve as prototypes for future innovations is vital. Furthermore, the strategy is a huge aid to logistics, as the labs can operate independently, with restocking of materials and equipment maintenance potentially coinciding with personnel shifts that occur every four months.

The vision for the ELM is to be “the platform for the future of the Rapid Equipping Force,” according to Newell.

Plans for the ELM extend past 2014, when troops are scheduled to leave Afghanistan, and beyond the battlefield, as the REF considered other possible uses. Natural disasters and humanitarian efforts are often impaired by logistical problems that cannot meet the urgent need for parts. ELMs could serve key roles in any coordinated response that draws on the REF, taking hours to produce what might have taken weeks or months to generate in addition to allowing someone on the field to teleconference with military and commercial experts around the world.

It’s exciting to see 3D printing used in potentially life-saving capacities. While some commercial uses of the technology have sporadically popped up in various venues around the world, this is one of the first applications that goes beyond merely the convenience or coolness of 3D printing and delivers something that just feels 21st century. That’s probably why the analogy has been drawn between these labs and the famous replicators from the Star Trek series.

For soldiers frustrated by the perceptions versus the realities of the battlefield, the ELMs should bring a sigh of relief. Having a mobile lab on site means no more waiting for weeks to solve a mission-threatening problem, even if it’s as minor as a flashlight power switch.

From the look of things, 3D printing will be right at home in the battlefields of the future.