A montage of scribbly cartoon faces, each conveying with distinct personality, would make any parent proud of their child’s artistic creation…except a child didn’t produce these faces; a computer algorithm did.

Meet the randomly-generated caricatures that are part of the Weird Faces Study, the product of a computer algorithm developed by media artist Matthias Dörfelt. Having an interest in both illustration and coding, Matthias designed the algorithm to follow a systematic order for constructing a cartoon face, even adding in noise to the shape of the hand to illicit a sense of a hand drawn face. Surprisingly, each face is not only recognizable, but has human qualities captured in the rudimentary sketches.

Describing the project on his website, Matthias writes that, “Even though the faces look hand-drawn, they are entirely expressed by algorithmic rules. Each face is random, each face is unique. Still, they look similar to my actual hand drawn faces.” As you can see from his journal, this isn’t an overstatement. 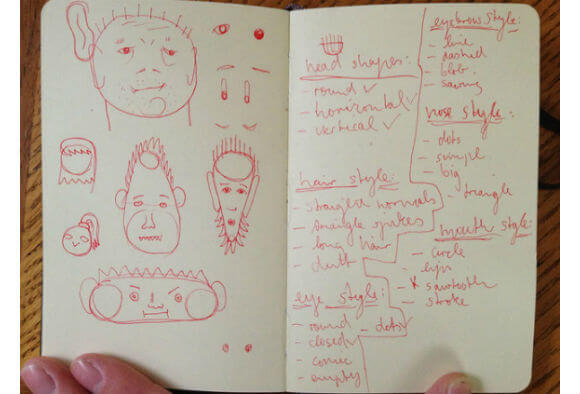 As reported on the Creative Applications Network, Matthias broke down the process of drawing into steps for the JavaScript-based algorithm to follow:

Matthias also states that his motive was to “create something procedural that has a truly individual artistic touch to it and is not instantly recognizable as a generative art piece.” 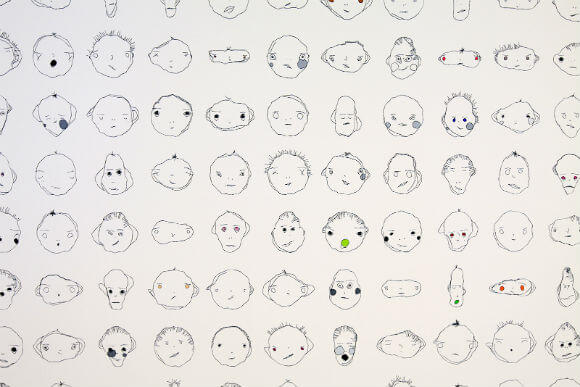 Facial identification is a vital function of the brain, so much so that an area of the temporal lobe known as the fusiform gyrus is dedicated to this task alone. The frequency with which people recognize faces in rocks on the beach, water stains, surfaces of planets, and clouds stands as evidence that our brain is pining to identify faces. It’s no wonder then that computer scientists have been interested in making algorithms to recognize faces for years using minimal  features for purposes as diverse as security systems, advertising, robotics and artificial intelligence.

This is possible because the human face has specific patterns and areas of contrast that are resolvable even by suboptimal cameras. These predictable patterns are relied upon by facial recognition technology that makes Facebook photo tagging possible as well as newer surveillance systems that can search through 36 million images per second matching faces. Instructing a computer to draw these features within standard constraints that passes our brain’s face test was just a matter of time and ingenuity. 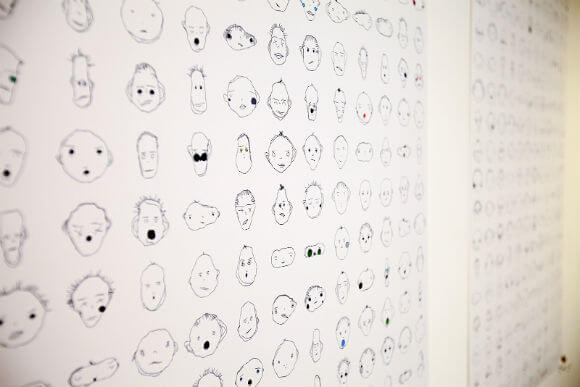 On the surface, Weird Faces may seem like just another cool media project that mashes together technology and art. But considering the relative ease with which the human face can not only be procedurally defined but imbued with a breadth of qualities in simple characterizations, it doesn’t take much to see how close we are to true digital storytelling, that is, entertainment entirely generated by computers.

The market for digital storytelling will likely be huge. After all, animated films are now mainstream money makers with broad audiences, strong character development, extensive merchandising, and potential for serialization and spin-offs. They have minimal language barriers since characters are voiced over, and they typically are written for universal audiences in completely imagined worlds, which avoids many cultural barriers.

Yet, animated film budgets have become significantly larger over the years. Consider how the original Toy Story (1995) had a budget of $30 million. What about 15 years later when Toy Story 3 was released? $200 million. In an era of automation across various industries to lower cost, it’s only a matter of time before the cost of a computers making a movie will be cheaper than humans.

And if you think that computers can’t tell stories or be funny, wait a few years. In time, they’ll become a reality too.

News-writing software from Narrative Science or software that can write romance novels from EdgeMaven Media hint at the beginnings of digital storytelling. Story structure is not only well established in creative writing classes all over, but these theories have been around since the heyday of Ancient Greek theater.

Google has recently developed an algorithm that ranks the funniest videos on YouTube based on feedback in comments, and a joint study from UCLA and Hewlett-Packard is creating an algorithm to predict which tweets on Twitter will be the most popular. Using the big data that is now prevalent, how soon will an algorithm be able to predict whether something is going to be funny or not? It may seem like it would be impossible to quantify humor, but researchers are actively investigating the problem (as well as companies) by empowering computational methods to even automatically detect “that’s what she said” type of humor.

Taken together, the convergence of these technologies will lead us to a time when a computer can generate an entertaining story and animate it with very little human involvement. In light of that, the Weird Faces study offers just a glimpse at what we very well may be laughing at it the near future.