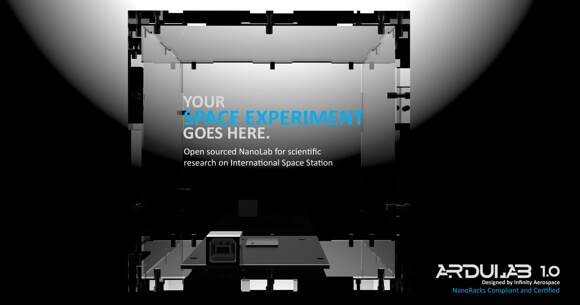 While private space outfits like SpaceX and Planetary Resources grab headlines with rockets and asteroid mining, a quieter grassroots transformation is underway. Infinity Aerospace, a new company whose founders met at Singularity University’s 2012 graduate studies program, is one of a handful of San Francisco Bay Area startups aiming to make space more affordable for students and researchers—not by lowering the cost of blasting stuff into orbit, but by leveraging information technology to make that stuff smaller and more efficient per pound.

Manu Sharma, co-founder of Infinity Aerospace, told Singularity Hub, “We are really interested in creating and fostering an open source revolution in space.”

He’s speaking literally and figuratively. Not only do startups like his want to democratize access to space, they want to do it using an open source micro-controller called Arduino that can be plugged into an array of sensors and custom programmed. That’s where Infinity’s ArduLab comes in. ArduLab is an Arduino-powered, plug-and-play microgravity research module, NASA approved and ready to be installed in the International Space Station out of the box—for just $1,999.

ArduLab was the winning proposal in a NanoRacks search for a fabricator of NanoLabs bound for the ISS. (NanoRacks calls any “indoor” microgravity experimental apparatus of the CubeSat form factor a NanoLab.) See here for ISS astronauts installing NanoLabs on the ISS:

What does ArduLab look like? It’s a scratch resistant polycarbonate cube 10 centimeters (4 inches) to a side and weighing 280 grams—a pre-assembled piece of space-worthy infrastructure with an Arduino inside. The whole set-up is pre-approved and sold to clients by NanoRacks, who will likewise handle the logistics of paperwork and line up launch slots.

Scientists and students are left to focus on their core competency—designing experiments. In the recent past, between designing an experiment and its space-proof housing, wading through paperwork, and securing a launch spot—it might take a research group four years to get to space. Students might not get the chance to see their hard work in action.

But with ArduLab and NanoRacks, experiments can fly in under a year.

Once the experiment is complete, NanoRacks sends the NanoLab to the International Space Station on the next available cargo ship—Japanese, French, American, or Russian—for $30,000 (education package) or $60,000 (private groups). A member of the ISS crew slots the cube into one of two racks capable of holding a total of 32 NanoLabs. Plugging into a USB port on the rack, each NanoLab uses the ISS system to draw power and relay data back to Earth.

In line with the San Francisco space startup NanoSatisfi—who wants to launch CubeSats and lease satellite time to students and researchers—Infinity Aerospace hopes ArduLab will increase the pace of microgravity research and development by opening the market up to smaller players. They’ll begin with ISS experiments and expect to expand to suborbital (Virgin Galactic and XCOR) and parabolic flights (G-Force One).

But the guys at Infinity Aerospace say ArduLab is just their first project—the firm has even grander ambitions. Sharma says, “Our vision is to get humanity off this rock. We want to solve big problems doing whatever it takes; that’s how our products will be shaped.”