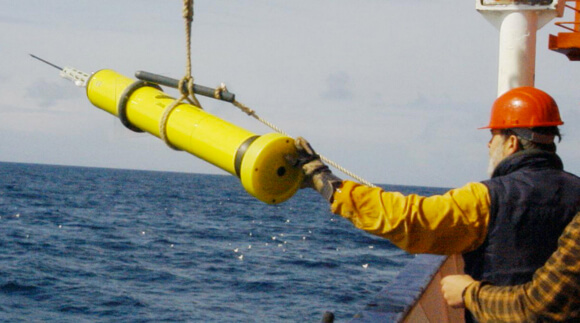 If there’s one thing we know about Earth’s oceans, it’s that we don’t know terribly much. But robot explorers are helping ocean scientists bridge the gap between known and unknown with more data. Argo, the most comprehensive data gathering system in the world, just recorded its millionth data point—doubling the total data gathered by ship in the 20th century in just thirteen years.

What makes Argo special, besides the sheer volume of data it’s recorded, is the breadth of its coverage. The system is comprised of a network of 3,000 robotic “floats” strung out across the “ice-free” global ocean. And whereas other standard measurement devices are ship-based—and their readings tend to cluster around shipping lanes and vary by season—Argo’s robots are evenly spaced to a coverage density of about 3° by 3° and offer year-round data.

How do they work? The floats’ fully autonomous onboard computers manage a repeating process of measurements—a two-stage descent to the target depth (up to 2,000 meters) followed by a six hour ascent to record up to 1,000 data points on temperature and salinity. The float then surfaces for six to twelve hours and relays its data to one of two land-based data centers via satellite.

Initially launched in 1999, Argo reached its 3,000 float goal in 2007. While the US has contributed 50% of the fleet, 22 other countries have provided funding for at least one float. Each float costs $30,000—including build cost, data gathering, and project running expenses—and lasts about  four years. To maintain those 3,000 floats, Argo requires 800 new units to come online each year at a total annual maintainence cost of about $24 million.

Is the cost worthwhile? Sure it is. $24 million is small potatoes for any government let alone a consortium of governments. The data harvested is public, timely, and the seed of a great deal of research. According to Argo, “Over 100 research papers per year are now being published using Argo data covering a broad range of topics including water mass properties and formation, air-sea interaction, ocean circulation, mesoscale eddies, ocean dynamics, seasonal-to-decadal variability, and global change analysis.”

What Argo is already doing for the ocean’s subsurface, firms like Liquid Robotics want to do for the ocean’s surface. Liquid Robotics wants to create what they call the “smart ocean.” To accomplish this the firm developed the Wave Glider—a robotic surfboard that runs a suite of sensors on solar power and harvests wave energy to move. Wave Glider clients can choose from 65 sensors to gather data on water and air temperature, barometric pressure, wave amplitude and frequency—and more.

Robots are fast bringing down the costs and raising the quality of comprehensive ocean monitoring. Thanks to firms like Liquid Robotics and international collaborations like Argo, the ocean is smart and getting smarter. The following video outlines the Argo project and shows a robotic float being launched: