[UPDATE: To clarify, Kansas City is the first city to receive Google Fiber, but Chattanooga, Tennessee built a 1Gpbs fiber network a few years ago, thanks to the publicly owned electric power system, EPB. You can learn more about the program here.]

Last November, neighborhoods in Kansas City became the first to enjoy the 1Gbps Internet speed made possible through Google Fiber. The service is not only the fastest ISP in the US, it is also prompting Time Warner to increase speeds and lower rates in the area, ushering startups into the area, and making a bunch of Kansas City users who opted into the service incredibly happy. As Google considers the possibility of bringing Fiber to other communities (some signs points to Canada as a possible spot), a group of remote farmers in the UK with sluggish Internet speeds decided they didn’t want to wait on their ISPs, the government, or even Google to deliver an upgrade to their broadband speeds.

They opted to build an ultrafast fiberoptic network themselves.

Located in rural Lanchashire in the northern part of England, the local landowners began working together to spur interest in bringing fast Internet to their rural community. As reported by the BBC, they hammered out a business plan as a “not for profit” community benefit society and began selling shares into Broadband for the Rural North (B4RN). To get the network built, locals invested their time and physical labor to dig trenches and lay fiber cables while raising half a million pounds. After installing the network on the property, which is estimated to be around $1,500 (much less than what ISPs would charge), the cost of the service to residents is only $45 a month and delivers Internet speeds that are about 75 times faster than the average in the UK.

To further raise awareness of their efforts, B4RN has hosted a few open houses showing off super fast downloads (917 Mbps) and movie streaming to the media, business owners, and locals who are still on the fence. The plan is to continue to raise another 1.3 million pounds in order to roll out services to surrounding villages over the next seven years with the target of connecting 15,000 properties to the network. 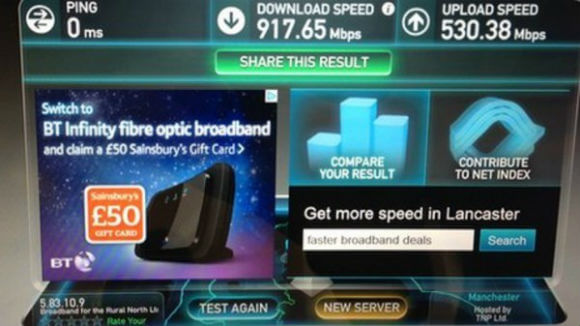 Though it may seem like a luxury to have such fast speed, the chief executive of B4RN, Barry Forde, explained to the BBC that farmers are increasingly required to fill out forms online, adding “If you haven’t got broadband you are severely disadvantaged.”

Smaller communities are often overlooked by corporate telecommunication companies because the cost of installing the system is too great for the number of customers who will ultimately use the service. Although big cities will inevitably see fiber come within the next decade, communities on the fringes will likely be stuck with 20th century broadband speeds for a long time.

Building the network themselves also means that they retain control over their land even as they increase its value by embracing the latest technology. Also, landowners can dig a fiber line on their property without having to sacrifice its aesthetics, something that would be more likely to happen with a corporation focused on cost alone.

Similar cooperatively owned fiberoptic ISPs were started in 2002 in North Dakota. The Dakota Central Telecommunications and Dickey Rural Networks completed their networks last year. Together, the two networks span over 10,000 square miles and service about 16,000 residents and businesses.

These efforts are being hailed as role models for other communities around the world calling for more digital services, such as Netflix and live TV streams, telecommunication services like Skype and Google Hangouts, online gaming and cloud computing. As more people transition to professional and personal lives played out in the digital realm, the demand for fast and reliable service will be paramount, especially in rural areas that have few options for gaining access to faster speeds. Undoubtedly, large telecommunication companies will be watching B4RN and other community networks very closely to see whether co-ops may be the next big threat undermining their customer base.

Looking ahead, rural fiber networks may become the great equalizer that slows down urban aggregation contributing to the rise of mega-cities. After all, many are driven into the cities in order to find work and have access to more “modern” services like broadband and mobile networks. But the nature of work is changing as a growing number of people are telecommuting or working virtually. Those communities looking to halt or even reverse this flight may turn to building their own fiber networks to eliminate the technological handicaps that they are often associated with.

So the next time you read where someone has labeled people in the country as being “behind the times,” just remember: they may be reading that same comment as they surf the web, download massive files, and stream their favorite shows without a hiccup.

You can check out more about B4RN in this piece from The One Show: