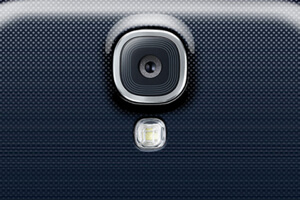 Samsung recently launched their latest salvo in the smartphone wars, the Galaxy S4. Most tech writers couldn’t decide whether they’d rather be bored by the phone or pan its ridiculous Broadway-style launch (see below, circa 17:20)—a little from column A, a little from column B, perhaps? We don’t write about every smartphone release, but this one caught our eye. The S4 includes a barometer, thermometer, and hygrometer (to measure humidity)—the first major smartphone to do so.

If you could care less about 13 megapixels on a smartphone camera but love to dream about the big data potential of smartphone sensors, these three are pretty cool additions. Temperature, pressure, and humidity are key weather station measurements.

Bundle those sensors into the top selling smartphone in the world, however, and it’s a different ballgame. Pair these sensors with a few compelling apps, and instead of tens of thousands of weather stations, researchers could hypothetically have millions inside a year. (Samsung shipped 215 million smartphones in 2012!)

Why couldn’t these sensors do for weather what Google Maps does for traffic?

As readers likely know, Google strips smartphone GPS data of personal information, assembles it, and sends it back to users as real-time traffic estimates. The results are increasingly accurate traffic forecasts and route time estimates—a serious improvent on chopper reports from the local radio station.

Using millions of smartphone data points, developers could knock out apps rendering detailed heat, humidity, and pressure maps and bundle them into weather apps. The data would be available at any given point in time, but maybe more powerfully, it would be available over time.

We’re talking billions of data points blanketing the globe each year. Climate studies might draw on smartphone data to inform their studies and reports. Why not?

The problem is, no one knows how accurate these new sensors are. The Galaxy S4 isn’t due out until May at the earliest. Further, unlike traffic-measuring GPS, for weather sensors to be useful, people will likely have to use them with the intent to measure. Mostly, smartphones are in climate-controlled rooms or pockets. Frankly, I’d rather not know the temperature, pressure, and humidity of my neighbor’s pants.

It seems almost inevitable, however, that more scientific sensors will become common in smartphones. As a side effect of the “specs” arms race, they could improve in quality dramatically. Not all these sensors will be used properly by every smartphone owner, but that’s the beauty of it. Manufacturers shipped 712 million new devices in 2012 alone. Even if weather bugs account for but 1% of that total, you’ve got seven million new mobile weather stations.