Six Of The Best Robot Videos Of Lego Mindstorms NXT 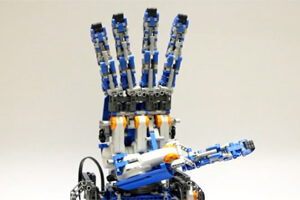 The success of Lego’s Mindstorms NXT has been one of the main contributing factors to the widespread interest in robotics. NXT enthusiasts of all ages have created some of the coolest designs, even capturing the attention of engineers who develop industrial robots.

Now, Lego has announced that the third generation of its NXT bot, dubbed EV3, will be available this August and will be easier than ever for anyone to get into building new bots. To celebrate, we thought we’d take a look at the best NXT bots to come out in the last few years.

Articulated Robot Hand: Robotic hands have long been of interest as prosthetics or to make humanoid robots. Now, they can be built out of Legos. The hand’s designer, Barbos, recently posted the video and a description of what was used in the design. The video itself is quite impressive and was from last year’s Lego Fanwelt in Germany:

360° Milling Machine: Back in 2011, Brazilian engineer Arthur Sacek designed a 3D milling machine for ZOOM Lego for Education. The NXT bot turned floral foam into amazing 3D reliefs in hours. Now, Sacek has recently posted a video of a 360° milling bot that sculpts 3D figures much like a lathe:

MakerLegoBot: In 2010, 3D printing was just a whisper, a rumor of a new kind of technology that would change the way we manufactured everything. Will Gorman of BattleBricks decided to turn Lego NXT in a 3D printer, but there was one caveat: it would “print” legos. Dubbed MakerLegoBot, the printer is a remarkable example of the future of manufacturing with machines building machines:

Cubestormer II: One of the most exciting videos of 2010 was CubeStormer, the Rubik’s Cube solving robot. While other cube solving robots exist, CubeStormer impressed in how fast it could solve a randomized Rubik’s cube. But ARM Holdings, the company behind the design of the bot, wanted to push it even further. So the designers of the bot, Mike Dobson and David Gilday, used four Lego NXT bricks and a Samsung Galaxy SII smartphone to build CubeStormer II that is scary fast, beating human records and showing how fast it can solve the classic toy:

LEGO Beer Machine: Last March, a video was posted on YouTube by Nxt1engineer showing off a remote control operated beer machine that automatically serves two kinds of Dutch beer. The designer has developed a M&M dispenser last December as well. Here’s the final version of the Lego beer machine:

PancakeBot: Father and designer Miguel Valenzuela built PancakeBot in 2011 and received sponsorship to take it to the 2012 Maker Faire where it was a big success. A more recent video provides a detailed explanation of how the 3-axis Pancakebot works, and now there’s even an Indiegogo campaign to get PancakeBot to this year’s Maker Faire in the Bay Area: