Coming Soon to a Body Near You? World’s Smallest Chip to Be Swallowable 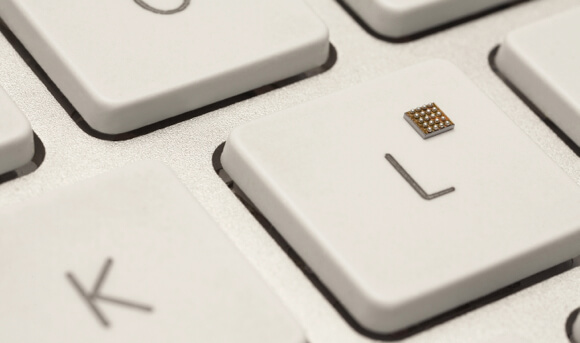 The Internet of Things is coming, but chips need to be more efficient, powerful—and even smaller than they are now. In all categories, Freescale Semiconductor is making waves. And their most recent contribution, the Kinetis KL02, is one of the smallest microcontrollers in the world.

Microcontrollers are computers, complete with processor, hard disk, RAM, and communication and analog connections.  The KL02 has 32 KB of flash storage and 4 KB of RAM. 1976’s Apple II came stock with 4 KB of RAM. At 1.9 mm by 2.0 mm, 56 KL02 microcontrollers would fit on just one of the keys I’m using to type this article. That’s 25% smaller than the next best competitor, according to Freescale.

Freescale’s press release makes no bones about it—this tiny chip was designed with the Internet of Things (IoT) in mind, “Space-constrained applications that previously couldn’t incorporate an MCU now can be upgraded to become smart applications, adding a new tier of devices to the IoT ecosystem.”

KL02 and other miniature chips like it will invisibly enliven virtually everything we interact with on a daily basis. Richard York of Embedded Processor Products says the Internet of Things ecosystem could “range from tiny sensors helping to monitor crops and deliver irrigation, to microcontrollers that enable entire buildings to be more energy efficient.”

But that’s just version one—the next iteration would place these tiny microchips in the human body to release medicine, perform diagnostics, fight cancer, or provide a digital  interface between brains and machines. Freescale’s Steve Tateosian told Wired, “We are working with our customers and partners on providing technology for their products that can be swallowed but we can’t really comment on unannounced products.”

Last year, the FDA approved a tiny silicon chip to be swallowed with pills that can tell doctors whether patients are taking their medication. Swallowable microcontrollers would similarly face the FDA. They’d have to prove safe for the human body. And presumably the chip would wirelessly relay data. Maybe one or two such signals originating in the body would be safe. But what about a full chorus line chirping away all day every day?

Further, there are recycling programs for larger electronics, but tiny microcontrollers in the digestive track would likely end up in the sewers.

Dumb things will soon be smart—you’ve heard it repeated ad nauseum. Cyborg-Earth will bristle with uncounted hordes of tiny embedded chips; smart-roads will talk to smart-cars, warning of black ice; smart-buildings will hold court with smartphones, regulating temperature and lights to match preferences and schedule; trees, oceans, and glaciers will dutifully report real-time conditions to scientists.

In the Singularitarian vision the Internet of Things sets the stage for nanoscale technologies enabling swarms of tiny machines that will construct industrial items or repair damage at the cellular level. That could be the future. For now, Freescale’s KL02 is another step on the road to nanoscale.