Festo’s Robot Dragonfly an Awesome Mix of Prehistoric and Futuristic 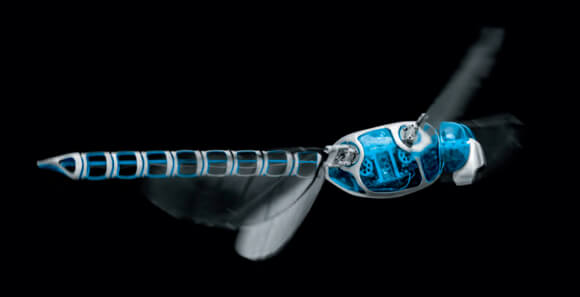 German manufacturing firm Festo recently resurrected a Paleozoic dragonfly. No, we’re not talking de-extinction or synthetic biology—this baby’s robotic. But at 70 cm (27 in) by 48 cm (19 in), Festo’s BionicOpter robot dragonfly is a futuristic flying machine with more than a touch of the prehistoric in it.

Dragonflies are clever fliers—they can hover, accelerate quickly, stop on a dime, glide, and even fly backwards. As Festo notes, “For the first time, there is a model that can master more flight conditions than a helicopter, plane and glider combined.”

Festo’s dragonfly is a marvel to watch move.

The robot is driven by nine servos, a battery, and an ARM microcontroller stowed in a flexible polyamide and terpolymer structure. The head and tail are moved by passing an electrical current through nitinol muscles. The computer controls the frequency (15–20 Hz), twisting (90 deg), and amplitude (50 deg) of its four carbon fiber and foil wings and, by taking in a constant stream of wing data and body position, corrects for vibration for stable flight indoors or out. (For more, check out the BionicOpter brochure here.) 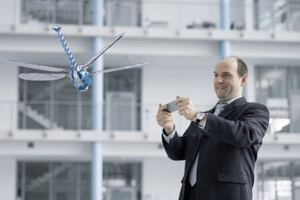 BionicOpter makes all the necessary adjustments automatically. The human pilot need merely steer it by smartphone.

It’s no secret Festo has a healthy respect for nature, especially evolutionary engineering. In tandem with universities, colleges, and development companies, their Bionic Learning Network has been pumping out biomimicking robots for years. And of course, we’ve covered a good number of them: the elephant-inspired Bionic Handling Assistant, the AirPenguin, the Air-ray and AquaJelly. The BionicOpter’s direct predecessor was the SmartBird, whose smooth wing action impressed a 2011 TED audience. (Go here for all of the Bionic Learning Network’s nature-inspired robots.)

But this robotic dragonfly might be their most complicated and impressive creation yet. It shows off just how much can be accomplished with today’s ultralight materials, miniature microcontrollers and sensors, and smart algorithms. We look forward to the first full-size dragonfly-inspired machine that includes a human pilot in the cockpit.