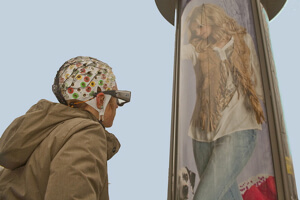 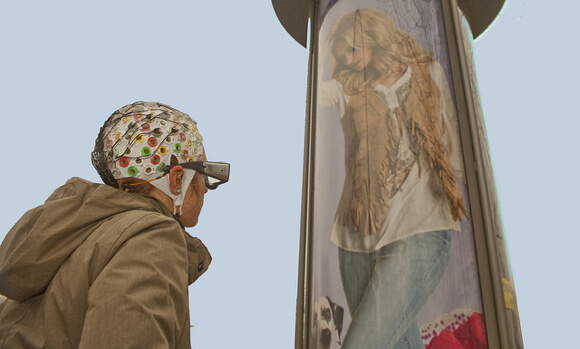 Samsung’s Galaxy smartphones are controlled by touch, gesture, eye movement—and your mind. Well, not exactly that last bit. At least, not yet. Perhaps half in the name of science, half for publicity, Samsung’s teamed up with Roozbeh Jafari (University of Texas, Dallas assistant professor and wearable computing expert) to translate thoughts into common computing tasks using an electroencephalogram (EEG) cap.

The EEG cap fits snugly onto the users’ head and uses electrodes to pick up the brain’s faint electrical signals. These signals fall into repetitive patterns when confronted with repetitive visual stimuli like blinking icons. The initial challenge was detecting and separating the right signals to accurately control the device.

In an MIT Technology Review video, a user sporting an EEG cap is shown manipulating a tablet—launching a music application, selecting the artist, and pausing and resuming music. The same test subject was able to communicate selecting icons linked to preset voice requests like, “Can I have some fruit?” and “I want to change my clothes.” 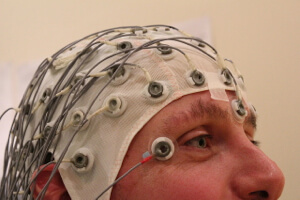 The news comes with a standard disclaimer: It’s still very early going. Though the team is using a “dry” EEG cap (most use gel), it still bristles with electrodes, and the system’s slow—one interaction per five seconds. So don’t hold your breath for a mind-controlled Samsung phone or tablet. The firm has no such plans. But down the line? Who knows.

Samsung’s lead researcher on the project, Insoo Kim, told MIT Technology Review, “Several years ago, a small keypad was the only input modality to control the phone, but nowadays the user can use voice, touch, gesture, and eye movement to control and interact with mobile devices. Adding more input modalities will provide us with more convenient and richer ways of interacting with mobile devices.”

There’s potential for this kind of technology to assist quadriplegics and those suffering from locked-in syndrome. The system’s 80%–95% accuracy is enough to be of use. And whereas past examples of brain-controlled devices for the disabled—like this wireless thought-to-speech device and, more recently, BrainGate2’s mind-controlled robotic arm—are brain implants, EEG is non-invasive.

Whether this tech shows up in commercial phones, tablets, or life-enhancing devices for disabled folks—it’s pretty amazing you can think a thing and make it happen onscreen. What will we control with our thoughts ten and twenty years from now?